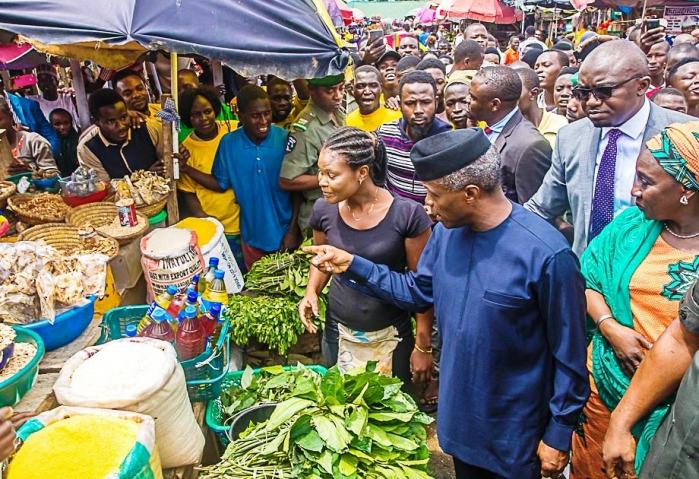 Nigeria’s Vice President, Professor Yemi Osinbajo, has faulted the position of opposition Peoples’ Democratic Party (PDP), that the tradermoni and market money schemes under the Federal Government Enterprise and Empowerment Programme is meant to lure the electorate to vote for the ruling All Progressives Congress (APC), in the forthcoming general election.

Professor Osinbajo at the weekend stated this while fielding questions from journalists at the Asaba International Airport, after flagging off the scheme in Warri and Asaba, Delta state.

He said it was worrisome that some persons would think that the trademoni and market money empowerment programmes of the Federal government were a ploy to seek for votes.

The Vice President said the funds for the empowerment programmes were duly approved by the National Assembly which is strictly meant to assist market men and women enhance their businesses without any ulterior motives.

Hear him: “The scheme was duly approved by the National Assembly, if they don't like the empowerment programmes because they are on the other side then it calls for concern”.

Professor Osinbajo maintained that the federal government was expanding the scope of the tradermoni hence the visit to Ogbogonogo market in Asaba to interact with the beneficiaries.

The Vice President had earlier arrived the Asaba International Airport at 5.27 pm amidst cheers by supporters and stakeholders of the APC who had thronged the airport.

He interacted with some market men and women on their businesses and enjoined them to inject the fund into their businesses in order to from it to an enviable height as there was greatness in little beginnings.

Earlier some petty traders who received the TradersMoni lauded the Federal Government for the programme, promising to utilize the loan effectively to improve their trade and pay back early enough to attract more loan.

Mrs Chinwe Ayasi, Mrs Christiana Onyenbu, and Miss Favour Emmanuel, who deal on vegetable, tomatoes, palm, melon and other food ingredients in makeshift shops and wheelbarrow, said their lives would have been better than what it was if other past governments had impacted them in like manner.

They affirmed that they have received alerts of N10, 000 each on their bank accounts, noting that they were registered on Thursday.

Police Confirm SaharaReporters' Story On Killing Of Citizen In Abuja