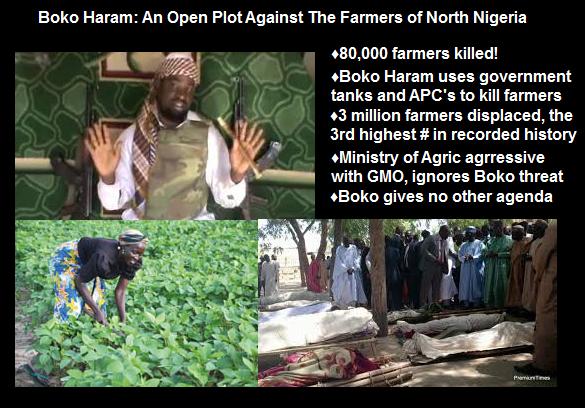 There is one thing the world has recently learned about the nature of Nigeria’s Fulani herders: they are ruthlessly vindictive.

Disclaimer: Now before any apologist embarks on maligning me for this fact-based analytical essay, I proudly introduce by ancestry: I am a pure Fulani descendant. I recently published the results of my Ancestry DNA test which revealed a whopping 19% pure Mali blood. This proves my roots in the Fulani migration from the ‘Futa Jalon’ area as Dokubo is fond of saying. I challenge many who claim to be Fulani descendants to test their DNA. Many are Hausas through and through with 100% Nigerian DNA and only Fulani-wannabes. [See: Ancestry DNA: Dokubo Was Right, I Am From Futa Jallon! a�� Dr Peregrino Brimah ]

Question #6 of my popular article in June of 2014, ” The 20 Questions We Must Ask About The Boko Haram Insurgence ,” as published in Ynaija, was as quoted;

“#6. What is their agenda? Judging by their only recognizable mission, are they set out to destroy farming in Nigeria and the northa��s primary resource? Recognizing that in their four years of major carnage, they have almost exclusively targeted farmers in the north and farming villages killing over 80,000 farmers and displacing 3 million.”

I asked the same question in my 21 revised questions “in light of the Baga massacre ,” as published in January of 2015 in OsunDefender. I asked:

“Why does Boko Haram kill the local farming population? The terrorists then in need of food invade markets and livestock farms in neighboring Cameroon to get food. What is the logic here?”

Who is the enemy of the peasant farmer?

The regional politicians in Borno and neighboring countries are also very suspect. Ali Modu Sherriff’s fraternal brother, Kashim Shettima has been accused of eagerly buying up the now abandoned lands in Borno, including juicy plots in Reservation areas of the capital while the terror saga was ongoing. I personally know a friend in our organisation who the governor bought his property at the price demanded without negotiation.

But more credibly, while these above may like the released lands, there is another candidate who has been proven to love to sack farmers from their land by violent means, ruthlessly killing everyone in villages, burning the villages down to ensure that no human returns to live there, so as to permanently free up the lands.

I asked in “ 21 Questions ” last year January: “If results points to objective; is it reasonable to say that Boko Harama��s agenda, as their actions clearly spell out is simply annihilation of the populace and occupation/annexation of the land?” Also commenting, “What is Boko Harama��s real agenda? If Boko Haram wishes to establish a caliphate in Nigeria, why would they kill the very population that they intend to preside over?”

A cursory look across the middle belt shows a parallel with Boko Haram’s modus operandi that has been so for ages. Clashes between Fulani herders and farmers have typically resulted in the herders returning someday and perpetrating genocidal massacres of the farming communities, burning everything down.

Indeed, during the Jonathan years, we wrote about these unknown 3-500 so-called Fulani herders who had been ravaging the middle belt just as Boko Haram had been doing in Borno. We struggled to distinguish to two.

The day the Jonathan government finally caught some of them, it was announced that they were Boko Haram members and hired mercenaries. See in Vanguard of April, 2014, ” Fulani herdsmen confess to membership of Boko Haram .”

While Boko Haram has many sponsors and wings, including political, its mission(s) may have remained illusive for these obvious reasons. As I postulated earlier, by virtue of its operationsa��decimating farming populations just as the rest Fulani-sponsored mercenaries do across the middle belt and south, Boko Haram may have always been sponsored by Fulani elements who have been unhappy with the Kanuri farmer as land, water and resource competition gets steeper. I will add to and elaborate on this ultimate conclusion later.

Insight On Fulani Vindictiveness From el-Rufai

Current Kaduna state governor, Nasir el-Rufai, during a period of hot debate on the wars between the Fulani and Berom people in Jos, revealed what he felt as a ‘Fulani’ (I am not sure what his DNA results are and we cannot say he speaks for all Fulani), was the nature of Fulani people.

El-Rufai in July of 2012, described the Fulani as scripturally vindictive. The governor used a Quranic phrase of God’s “vengeful nature” to emphasize the vindictive nature of the Fulani as he perceived them. The governor did not even exclude soldiers in the targets of vengeful Fulani retaliations. “Offending the Fulani is like a loan,” he said, using the scripture-based terms. A loan you will repay the debt collectors one day or the other, even if you are a soldier. And I am writing this here for all to see for all time, he said.

Quoting el-Rufai’s tweet: “We will write this for all to read. Anyone, soldier or not that kills the Fulani takes a loan repayable one day no matter how long it takes.”

We will write this for all to read. Anyone, soldier or not that kills the Fulani takes a loan repayable one day no matter how long it takes.

It is the same idea that has come to light in recent Fulani-related massacres across the nation. Defending the Agatu massacre, a so-called representative of Gan Allah Fulani Association claimed that it was today, under Buhari’s government, that the Fulani were retaliating for atrocities against them since 2013. [See: EXCLUSIVE: Why we struck in Agatu a�� Fulani herdsmen ]

One of the suspects in the Enugu massacre, Mohammed Zure, arrested by Enugu police for other charges and then found to have a cell phone video of him killing a Nimbo victim, confessed that the Fulani herders had a terror family network across the nation and any one could be activated to join in these massacre and annihilate missions.

This Answers Question On Boko Haram’s Mission Against Kanuri Farmers

So while we have been used to Fulani herders’ vindictive natures across the country, them as a stand-alone group having been accorded the 4th worst terror group in the world; how come we have failed thus far to identify the plight of the people of Borno with this same formation?

Boko Haram is without doubt, a mixed and much convoluted group with many heads, but as far as the extermination of the Kanuri farmer goes, this aspect of the sect’s operation is in tandem with the same by the so-called Fulani militants on all “enemy”communities across Nigeria’s middle belt and south.

Just as the Fulani militants are unforgiving of those communities it goes back to years later in attempt to annihilate, so also the herders most likely took offense with Kanuri peasant farmers (over some cows stolen, etc) and has since engaged in the identical mission of annihilating them without regard and usurping their lands. This is one of the considerations that made us propose a “Kanuri warrior” in 2014 as the only way to defeat Boko Haram.

As we have written on in the past, a popular commentator with links to Boko Haram, Ahmed Salkida has earlier made reference to the pivotal history of clashes between herders, fishermen and farmers around the Chad lake. “The impact of the drying lake is causing tensions among communities around Lake Chad. There are repeated conflicts among nationals of different countries over control of the remaining water. …Fishermen also want farmers and herdsmen to cease diverting lake water to their farmlands and livestock.” [See: Africaa��s vanishing Lake Chad, by Ahmad Salkida in 2012]

As this “disappearing lake” decreased to a tenth of its size, increasing competition for the water sparked serious fights around it. It can be imagined that the herders around lake Chad would have been more disgusted by farmers and fishermen competing for the dwindling lake’s provisions, and would have perpetrated their carnage right there on them without remorse or challenge.

Note: I am not excluding the violence and provocation by the farmers against the herders, but what makes the issue of the herder terror a topic is its organized nature and network. This is what is in focus here.

The training in weaponry, access to arms and ammunition and incendiary and ruthlessly vindictive “debt collector” modus operandi of the Fulani militants across Nigeria and Boko Haram are too identical to distinguish. The question is: who is the boss of who? I am of the opinion that well placed Fulani (wannabe) actors are sponsors of the sophisticated, whassap group coordinated Fulani and Boko Haram terror synchronized anti-farmer assassin operation.

PDP chairman, Bamanga Tukur, recently commemorated by President Muhammadu Buhari is reported by Punch to have said in 2012, “Boko Haram is fighting for justice; Boko Haram is another name for justice.” Is this the “justice?”

Similarly, Borno governor, Kashim Shettima is reported and witnessed to have said on more than one occasion, “Leadership calls for restraint. Believe me, if I spill the beans (on the sponsors of Boko Haram) heads will roll.” Is this the beans?

We urge Nigerian security departments to take the Boko Haram and militant nomadic terror most seriously by apprehending and bringing the heads of this monster to book. Terror will never be successfully defeated in Nigeria until the sponsor(s) repay the loan they took from the people of this could-be-great nation.

118 thoughts on “Was Boko Haram Sponsored By The Vindictive Fulani Herders?,”