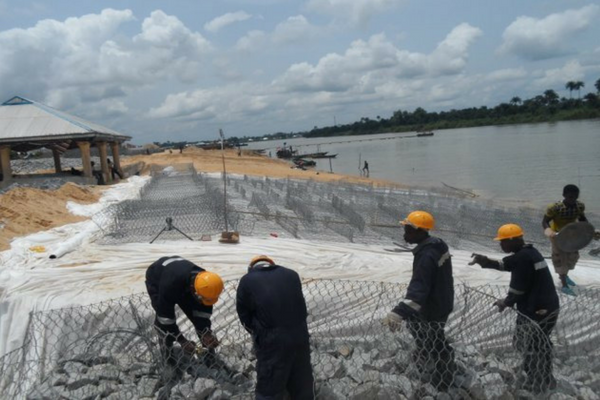 In order to prevent the effect of flood in Asaba and its environs, the Anwai River and the Amilimocha Stream in the state capital would be fully dredged to check the effects of storm water that would be emptied into them from the on-going massive drainages being constructed in the state capital, the state governor, Ifeanyi Okowa, has said.

The Governor made the disclosure Thursday while inspecting on-going drainage projects in the state capital.

Governor Okowa, who fielded questions from newsmen after the exercise said, a�?I am glad that the projects have gone far, the contractors are reputable companies that requires little or no supervision, we are happy with the pace and quality of work being donea�?.

a�?We are conscious of the volumes of water that will pass through the storm drainages and we have asked the Ministry of Environment to dredge the Anwai River and the Amilimocha Streama�?, the Governor disclosed, adding, a�?our interest is to ensure that flood water is effectively channeled in the capital city and other parts of the state where there is need to control flood watera�?.

He observed that during his recent town hall meeting in Warri, the issue of constructing drainage in that area was raised, stating that work was ongoing in the area and the contractor handling the drainage by Effurun round about promised to complete the project by July.

a�?Two days ago, we inspected the drainage at the Warri/Sapele road; that drainage is essentially to drain that particular road which is being done into three lanes on both sides, that is, from Enerhen to Effurun junction, but, at the town hall meeting, the people of Warri South asked for a proper drainage that will be done in the whole of Warri, unfortunately, in the past, we have been doing a kind of make-shift drainage without having any study and I promised them that we will first of all, carry out a proper study of the area by setting up a team with a consulting firm along with some selected elders from that area who understands the topography so that a proper design could be createda�?.

Governor Okowa urged the contractors handling drainage projects to increase their pace so as to ensure that most of the excavated areas were covered to avoid incidents during the rainy season.

He assured that when completed the storm drains would effectively check incidences of flooding in the capital city.

Benue Killings: Bishop Urges Christians Not To Fight Back