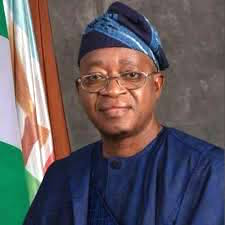 A group known as Ifelodun Youth Vanguard (IYV) has urged the Governor of Osun state, Adegboyega Oyetola to urgently wade into the issue of elevation of Eko Ajala royal father to ‘part II Oba by the State government and the rejection of the move by the king of Eko Ende in Ifelodun Local Government Area Of Osun before it becomes a serious intra-ethnic conflict.

The group in a press release by its chairman and secretary-Sanmi Akande and Adegoke Matthew, it warned that an imminent intra-ethnic conflict is currently brewing between Eko Ajala and Eko Ende in the Ifelodun Local Government Area of State of Osun over the elevation of State elevation of Eko Ajala royal father to position of ‘Part II Oba’.

“As the apex body of youth groups in Ifelodun local government area of Osun state, we are aware that the bone of contention, was the elevation of nine traditional leaders to the position of ‘Part II Obas,’ and which the traditional ruler of Eko Ajala, Oba Akinwale Abimbola Sunday is one of the beneficiaries of the elevation. The Elende of Ende land, Oba Abdulrahuf Olaniyan Adebayo kicked against the move of the State government under the former Governor of the State, Abdulrahuf Aregbesola and approached a court to prevent the elevation of Oba Akinwale Abimbola Sunday as ‘Part II Oba’ in the Ifelodun local government area of the State.”

The group added that despite the fact that the case is still in court and the next hearing date is February 17, 2020, the Elende of Ende Land has tried to instigate mayhem in the community on several occasions.

Speaking further, the group stated that it took the intervention of security agencies that prevented breakdown of order in the two communities. ‘A stitch in time saves nine, we are using this medium to appeal to Osun state government and all relevant security agencies and the entire traditional council in Osun state to wade into the matter before it becomes another Ife-Modakeke intra-ethnic conflict.

“The government of Osun state must urgently do something about this issue before it becomes a serious crisis. As we write now, Elende of Endeland has erected a sign post stating ‘This Land Belongs To Eko Ende’, while in actual sense, the land belongs to Eko Ajala.

The Group urged the State government to wade into the crisis, warning that the action of Elende of Endeland might lead to breakdown of law and order in the community if not timely addressed.