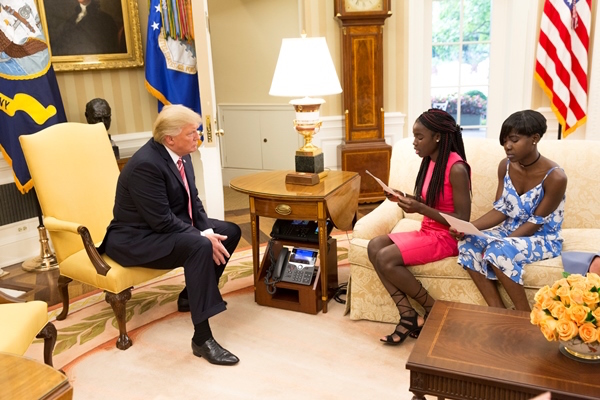 Joy Bishara and Lydia Pogu, two of the Chibok schoolgirls, who escaped from Boko Haram captivity in 2014, in a letter read to U.S. President Donald Trump during their recent visit to the White House, said “where can people like us look for hope, when there is danger?”

The White House released more photos of the girls on Saturday, saying during their visit, Joy and Lydia “read the President a letter about their experience”.

An excerpt of the letter is below:

“Mr. President, we urge you to keep America safe and strong.

“We know that some people are trying to discourage you.

“Do not be discouraged. You are right to keep America safe and strong.

“Not only for America. But for the world.

“If America is not safe and strong, where can people like us look for hope, when there is danger?

“Finally, we urge you to keep making America prosperous.”

Trump and his daughter, Ivanka, hosted the Chibok schoolgirls during their visit, the White House said.

The Boko Haram insurgents broke into the school and kidnapped the girls, who were sitting for their final exams.

“But approximately 50 of the girls have escaped, including Joy Bishara and Lydia Pogu, who visited President Donald Trump, and his daughter, Ivanka Trump, at the White House last Tuesday.

“The girls are recent graduates of Canyonville Christian Academy in Oregon, and they were accompanied by the school President, Doug Wead.

“The President and Ivanka were both deeply moved by the girls’ visit,” the statement by the White House read.

The Chibok schoolgirls’ visit coincided with the U.S. State Department’s release of its annual Trafficking in Persons Report.

“In the wake of the report, the two Chibok schoolgirls’ visit to the White House was a reminder that the survivors of the scourge of human trafficking are heroes whose courage can inspire us all,” the White House said.

“Let us recommit ourselves to finding those still in the shadows of exploitation, and let us celebrate the heroes who continue to shine on the darkness of human trafficking.” (NAN)

There Is No Hunger In Nigeria, Agriculture Minister Claims

10 thoughts on ““We found hope, safety in America when in danger” – Chibok girls tell Donald Trump”