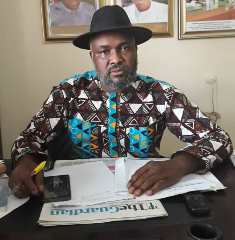 Few days back, I had a brief stopover at the premises of the Imo state university in Owerri, and the sights and sounds that yours faithfully perceived and heard were frightening and disappointing at the same time.

The first shocking phenomenon I noticed was the rapidly declining standards of physical infrastructures and the near- total collapse of basic facilities that ought to be functional in any 21stcentury compliant and standardized tertiary institution.

From the bad roads that littered within and without the Imo state university to the decrepit lecture halls, what the school looks like is a university gravely in need of comprehensive facelift and infrastructural upgrade.

Possibly, the only positive I took away from the appalling state of affairs at this higher institution in Imo state capital, is the presence of a large pool of enthusiastic and optimistic students in their very prime who from all available empirical evidence are willing to imbibe the best of education that would propel them to become competitive in the increasingly knowledge-driven global community of humanity.

I saw a great deal of students at the Imo state university who are prepared to be educated and highly enlightened citizens of the world in the jet age of this twenty first century.

I also saw a building structure that looks so frail, fragile and in the very last stage of the decomposition but sadly, I saw many students trooping in and out of this nearly collapsed structure which the students told me is identified as old ETF building.

ETF, I understand stands for education Trust Fund which is an acronym for a behemoth of an agency under the purview of the Federal Ministry of Education in Abuja.

This agency controls tons of billions of Naira yearly as budget.

But as can be deciphered, this education trust fund must rise from the debris of crass irresponsibility, corruption, inefficiency, and incompetence and must as a matter of national emergency rush to the Imo state university to take down this structure that is like a time bomb which may explode any moments from now and the consequences may be very severe in terms of casualties since students still make use of this bad structure.

The disappointing state of facilities at the Imo state university logically brings us to the question of what the agenda is for the two ministers who recently took positions at the Federal Ministry of education.

The minister is returning for the second tenure even as his counterpart, who is the minister of state, once headed one of the juicy interventionist agencies under that education ministry as the chairman of the governing board.

Adamu Adamu who is a newspaper columnist turned minister of education made a revelation that it took him 18 months in the last four years for him to understand his job.

We then ask why President Muhammadu Buhari gambled with the strategic education ministry by fixing a round peg in a square hole who took all of 18-months to even begin to understand the fundamentals of his job.

It would however seem that in the school of thought of president Buhari, his kinsman Alhaji Adamu Adamu, a journalist, may have now mastered his new terrain well enough to repeat another term of office.

It is therefore the expectation that with the infusion of a vibrant youngster who is at home with the ministry of education in the person of Emeka Nwajiuba, the all-important education ministry will resurrect from its comatose nature to truly play the key role of comprehensively empowering our young people to take their pride of place in the world. The department’s and agencies under this ministry have veered off their statutory mandates and there are cases of corruption all over which must be fixed. The returning minister was beaming with laughter like a hunter that has returned with a giant booty from the forest.

Adamu had told Nigerians on the day he was returned as education minister that in his first term both him and his then minister of state professor Anthony Anwukah had worked hard to put together the ministerial strategic plan (MSP 2016-2019) to the point of implementation before their tenure ended on May 2019.

The minister said: “We had labored over the time on the strategic plan for the education and only to the point of implementation then we had to leave. I had the opportunity to remind President Muhammadu Buhari that the nation was expecting so much from him.

“When we were sent here the first tenure, it took me one and half year to understand the ministry; it also took me as a surprise when I was re-assigned to the ministry of education. I had thought I would be sent to another ministry where I would have to learn all over again. Now, I know that I am coming back to a family.

“You all are my teachers and hopefully we will work well together again.

“The reality is the confidence I reposed in the Permanent Secretary. When I came here I had to get the idea of what education is and I could only see what is happening here after a year and half.”

Adamu noted that Nwajiuba had abandoned his Doctorate programme to serve in the cabinet of President Buhari as minister, adding that his appointment as minister of state would be helpful.

Nwajuiba was Chairman, Board of the Tertiary Education Trust fund (TETFund) until his appointment as the minister of state for education.

Nwajuiba said he was at home in the ministry.
”I am comfortable that I do not have to go to another ministry but here with my senior brother at the ministry of education I can be tutored and well directed,” he said.

If truth be told, I think this ministerial strategic plan for 2016-2019 in the education ministry only functioned on paper and not much was achieved on ground because most federal government’s funded educational institutions did not witness any transformation in terms of improved facilities but rather most of them are till today, ghosts of their hitherto selves. The University of Nigeria Nsukka and the Abuja University depict how bad the state of facilities are for students. At a Federal university in Bauchi, over a dozen students died following the collapse of a bridge in their school.

At the foremost university of Nigeria, the female hostels within the campus do not have functional toilet facilities just as other equally key amenities like water and electricity supply are very poor. The same can be seen from the University of Abuja which is just a stone throw from the seat of power.

The new and not so new ministers should do all within their power to change this evil trend and keep to the spirit behind establishments of Federal universities which should not be governed necessarily by persons from the so-called catchment areas in clear breach of competencies and merit.

The University of Lagos has been in the news for political battles between the governing board and the VC. Universities whether federal, state or private should be made to observe an administrative benchmark that would promote good governance, transparency and accountability. On no accounts should students of higher institutions or even primary and post-primary be subjected to dehumanizing conditions of defecating in the open and learning under grave conditions. Let’s turn our attention to what obtains in educational faculties in Europe to see what can be imbibed.

In a piece written by Tariq Jahan, he clearly told us the pragmatic values of education which must guide how the strategic education system must be governed in this fast moving information technology-driven knowledge generation.

He wrote that while being youths, we are at the center of absolute strength. We think big, hope for the best and envision a better tomorrow, thereof making unceasing efforts to turn our lifelong dreams into concrete actions. Youthfulness is in practice a phase of thorough and whole change—a perfect transition in terms of physique and mentality, society and environment, regionality and universality.

The phase of youth, the writer argued transports one from one world to another world—a world so different like scuba-diving and space exploration. Youths are such a layer of the society which has been the center of the focus of the remainder. The period of youth happens to be one of essence and core, ripened common sense and rationale accompanied by practicality and pragmatistic tendencies.

In my opinion, “People without education are like weapons without bullets.” Right after our birth, we have, in one way or the other, been imparted education. It would be no exaggeration to think of education vis a vis people like petals of the same flower or like two sides of the same coin, one entirely relying upon the other. Education is exceedingly instrumental for the realization of one’s innate self, strength, natural fitness, and factual being.

Education is so necessary and essential that its insufficiency or absence may lead one to choose improper path of life.

The writer wrote too that to begin with, education is a factor of change in one’s life: Education for the youth is the medium with the help of which they can quench their thirst for realizing their potentialities. The youth should be equipped with the best possible education and facilitated with favorable conditions to, through the attainment of their skills, be an asset to the community and that way contribute actively to the development of the community, as they are essential elements of the society. In this globalized and knowledge-based world, every young person should be given the opportunity to contribute to the society while fulfilling their potentials.

The writer posited further that since education, as conceived of, seeks to change the way one lives and thinks, the youth first must be provided great educational opportunities and suitable conditions, the hurdles laying on their way to educational ends ought to be removed, only then will the youth be a boon to the community. The self-development of the youth is directly tied with that of the society. To help others change their paths of lives, one must first start from himself. To reach apex, it should be started from the bottom. Beginning with self-awareness, the youth should go up, flourishing and prospering. When children are sent to schools, they are on the point of fact opened the wide windows of the dark rooms of this world.

There they can learn about their society, environment, social ethics and values and so on, the writer stated.

“So, it is incumbent upon every society to create constructive conditions for the youth so as to receive education. It is with the help of education that the youth can choose and seek their interests. They choose their ways and directions of lives. With this, they set goals for themselves and strive to achieve them. Education propels the youth in the right, proper and straight direction”.

The aforementioned should serve as a guide for the two ministers in the education ministry because the best way to fix this broken society is to fix education and deliver quality education to the youths who are the leaders of today.

NEMA And How Maihaja Is Fulfilling A Spiritual Mandate

Break up? Forget it!

Re: The academic nonsense called "Theoretical Framework" in Nigerian universities

994 thoughts on “We must fix education to fix Nigeria.”