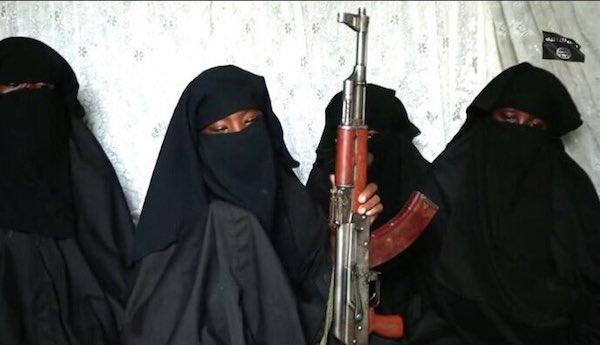 4 females claiming to be among the Chibok girls kidnapped by Boko Haram three years ago have appeared in a new video released by the terror group today explaining their decision not to join other abducted girls released last weekend.

About 82 girls were freed last Saturday in exchange for Boko Haram commanders. They were among around 270 kidnapped by the jihadist group from the town of Chibok in April 2014.

Responding to questions posed by a male voice in the background, the abducted schoolgirls gave their names and exact class level at Chibok Girls High School where they were kidnapped.

In the video obtained by Nigerian journalist Ahmad Salkida, one of a group of four females covered in full-length Muslim veils claiming to be among the abducted girls said she did not want to return home because her parent’s “are not worshipping Allah”.

“We don’t want to reunite with our parents because they are not worshipping Allah, and I urge you to join us,” she said, holding a rifle and speaking in the Hausa language spoken widely in northern Nigeria.

She added: “We have not been forcefully married to anybody. Marriage is based on your wish.”

The authenticity of the video could not be immediately verified.

Reuters reported that mediator and lawyer Zannah Mustapha said some of the abducted girls refused to be released, fuelling fears that they have been radicalised by the jihadists, and may feel afraid or ashamed to return to their old lives.