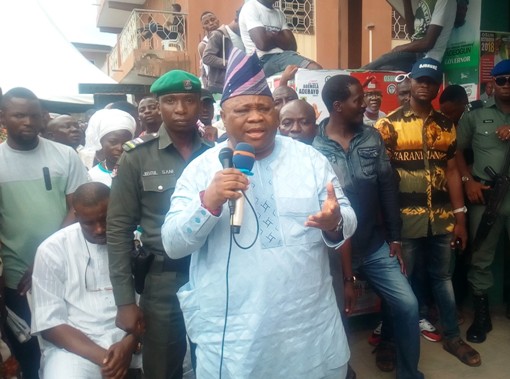 The Senator representing Osun West Senatorial District, Senator Nurudeen Ademola Adeleke today said the People’s Democratic Party in Osun state is ready to take over power from the All Progressive Congress and alleviate the suffering of the people of the state.

Speaking at the Secretariat of the People’s Democratic Party in Osogbo, capital of Osun State when he submitted his letter of intent to run for the governorship race, Adeleke said he came out to liberate Osun people from the shackles of Aregbesola’s administration.

He hinted that his entire household prayed and fasted for 40 days, seeking the face of God on gubernatorial aspiration.

Adeleke who was received by the state Chairman of PDP, Honourable Soji Adagunodo said he consulted adequately before joining the race.

He told a huge crowd of his supporters who thronged the PDP Secretariat that he has come to send ApC away from Osun.

He urges the people of Osun to vote for him and assures them that he would sustain the legacy of his late brother, Senator Isiaka Adetunji Adeleke

Imo 2019 Guber: Uche Nwosu And His Politics Of Noise Making