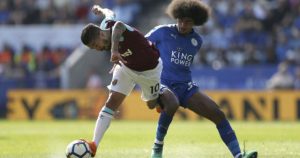 LEICESTER, England (AP) a�� West Ham took a giant step toward securing its Premier League survival and piled more pressure on Leicester boss Claude Puel with a 2-0 victory at the King Power Stadium on Saturday.

Puela��s team went into the match having won just twice in its last 11 league games. He was not helped on Saturday by the absence of nine players through injury and suspension but midtable Leicestera��s performance, on a hot afternoon, was lukewarm at best.

West Ham inflicted a fourth Foxes loss in five league matches with goals in each half from Joao Mario and Mark Noble.

The opening goal came after 34 minutes when Arthur Masuakua��s far-post cross from the left was controlled and knocked back into the six-yard box where Joao Mario simply tapped the ball home.

West Ham scored its second goal in the 64th and it was a strike worthy of settling any match. Joao Marioa��s free kick was cleared by Aleksandar Dragovic as far as Noble, who struck the ball first time from 25 yards (meters) out and his shot flew into the bottom corner of the net.

Conte, Hazard to be rewarded with record wages as Chelsea look to spend £200m: report