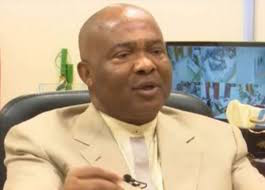 On Tuesday, January 14, 2020, what many people had considered the unthinkable happened when the Supreme Court declared Senator Hope Uzodinma the Governor of Imo State and ordered him to be sworn in immediately. Shocked by the development though, many did not give the new Governor any chance, as it were. But as the days go by it is becoming clearer that Imo State did not lose. As it is written in Romans 8:28: “And we know that all things work together for good to them that love God, to them who are the called according to his purpose”.

Governor Hope Uzodinma, contrary to certain previous baseless assumptions, is a very meticulous leader, kindhearted and focused on the greater good of the people. He has not done anything suggestive of a Governor or government that is vindictive. This attitude has brought unprecedented calm in the polity and predictability in government actions. This in turn would rob off on investors who need such qualities to invest in the state economy. With eyes focused on the ball, the Governor has shown both decorum and discipline in taking briefs from different ministries, agencies and parastatls, in order to equip himself towards taking actions that would impact on the state positively. On some days the Governor spends 16 hours taking briefs. This not only further demonstrates the Governor’s deep belief in due process and the rule of law, but typifies it.

Every keen observer of events in Imo State of recent would see that the Governor has brought new paradigms to governance in the state. He has kept faith with his Shared Prosperity Agenda. In his maiden address, the Governor promised Imo State a shared prosperity where “equity, justice, freedom, and the rule of law prevail over impunity and executive recklessness”. Said the Governor: “Our New Imo State will enshrine a new culture of shared prosperity in which the Commonwealth of the people is made available for the good of all. Above all, it is a new Imo State that will ensure good governance, prosperity, rule of law and equity. The mission cuts across party lines, religious leanings and intra-ethnic divides. From now on it will no longer be governance as usual, but governance of the people, by the people and for the people, without discrimination against anyone”.

To give fillip to his promise, the Governor began the unprecedented payment of workers’ salaries on the 25th of January. He assured that workers would get their salaries on the 25th day of every month and that he would pay the N30,000 Minimum Wage when the Committee earlier set up by his predecessor submits its report. The Governor moved a step further by voluntarily forfeiting his security vote. This, he said, emanated from the need to free funds so as to meet its current obligations.

In yet another stroke, the Governor surprised the most senior civil servants in the state with new vehicles. This move will no doubt instill hope and confidence in the civil service. It will also inspire excellence among the workforce. With a government that cares for its workforce, the workers now have a sense of reward from their state government.

With what the Governor has done, he has clearly demonstrated that he is both pro family and pro workers. This is in tandem with his Shared Prosperity Agenda. Because in the end, when prosperity is felt at home it is felt everywhere. Beyond this, being pro family holds out the assurance that the Governor would address issues of healthcare, especially infant and maternity healthcare services. It also holds out the promise of job creation, education and security, amongst others. The Governor has also shown commitment to his 3R Agenda – Reconstruction, Rehabilitation and Recovery – and continuing from where the past administration stopped.

Most people in the state believe that the Governor’s pledge to continue from where his predecessor stopped is a right step. It has been argued by political economists that lack of continuity in government is the bane of development in the country. They preach that a successor should have the political will to continue from where his predecessor stopped and avoid littering the state with uncompleted or abandoned projects. This might be why most people in Imo State rolled out the drums when the Governor directed that all contracts initiated by his predecessor would continue and asked the contractors who had got mobilization fees to continue work on their respective sites.

In yet another breathtaking move that demonstrates his commitment to reconciliation and shared prosperity, the Governor has paid members of the IMC appointed by his predecessor their January salary. This is notwithstanding that they vacated their offices before payrolling for January. All this was done without the usual celebration and noisemaking that often accompany government actions. According to a report by Greg Nwadike, the S.A. Media to the former IMC Chairman of Orlu LGA, “many of those appointees of Gov. Ihedioha were surprised early this week as they were invited to come for their cheques for their January salaries. Yes. Gov. Uzodinma also paid them for the month of January even when they were sacked before pay-rolling date of 18th”.

Mr. Nwadike said he could not keep quiet on the Governor’s magnanimity towards the IMC chairmen, members and their aides because doing so would mean ingratitude on the part of the beneficiaries. “I thought to keep off issues surrounding this administration, but if I do not appreciate Gov. Uzodinma for the salary payments approved for the former members of the Interim Management Committee (IMC) under Ihedioha, it may portray those of us who were part of that system and around members of that committee as very ungrateful people” he said.

5 thoughts on “What Governor Hope Uzodinma Brings To Imo State”