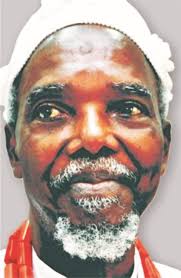 I never had the privilege of meeting Professor Vincent Chukwuemeka Ike, the Eze XI of Ndikelionwu in his long, star blazing life. But he is my literary father and mentor and I am not ashamed to proclaim it from the rooftops. Ike, perhaps more than any other Nigerian writer of any generation, largely defined what prose should look like to me. Scratch that: he has defined what the novel should taste like, feel like, breathe like, regurgitate like, and move like, to me.

A couple of days after reading about his death online, I surprised myself by breaking out into the Igbo dirge ‘Dibe, Dibe, Ndidi ka ma…’ as I went to fetch water after a day’s job. My mind was full of thoughts about the man and his books. Those who are familiar with his novel ‘Sunset at Dawn’ know that the dirge was sang at the funeral of its fictional Biafran hero, doctor and soldier, Amilo Kanu.

My connection with Ike goes beyond the shared name. With the exception of Pacesetters novels back in my teenage years, Ike’s novels, then mostly on Fontana imprint, were my staple. I grew up with Obuechina in ‘The Potter’s Wheel’, a novel that brought the 1940s Igboland vividly to my doorstep. The funny intrigues and pseudo intellectualism at the University of Songhai in ‘The Naked Gods’ took hold of me. My never ceasing thirst for fiction and nonfiction from the period of Nigeria’s civil war began with my encounter with ‘Sunset at Dawn.’ I still remember shedding hot tears along with Fatima, the Hausa wife of Amilo Kanu, during his burial. Indeed, before ‘Half Of A Yellow Sun’ there was ‘Sunset at Dawn’. In an interview with ‘The Nation’ newspaper, Ike said a fellow academic, also from the defeated Biafran side, declined to appraise the novel in its draft for fear of being hauled in by Nigerian security agents for venturing an opinion about a book that described Nigerian soldiers as ‘jigger infested vandals.’ Ike’s Yoruba wife, Ugoeze Adebimpe Ike, gave her husband the courage to go ahead with the novel, arguably his magnum opus. Underestimate the strength of a woman to your peril. I also enjoyed ‘The Bottled Leopard’ and ‘Conspiracy of Silence.’ Many younger writers of my generation single out his novel about examination malpractice in Nigeria, which has come to be identified by the first word in the book’s title ‘Expo 77’ as their favourite. They are entitled to their loves but whenever I think of Ike, I see ‘Sunset at Dawn.’

Like his great friends, Chinua Achebe and Christopher Okigbo, Ike was forged in the literary crucibles of Government College, Umuahia and University of Ibadan; institutions with teachers who built the whole man with the philosophy of Sir Francis Bacon: reading maketh a full man, conference a ready man, and writing an exact man.

Ike might not have had a barn full of literary prizes. He might not have been given the recognition he deserved by the gray beards of our Ivory Towers who do little or nothing to take literature to the street. Just like Ekwensi. It matters not. He lives on in the hearts of all who encountered his books and that is a writer’s greatest reward.

Henry Chukwuemeka Onyema is a Lagos based writer and historian. Email: [email protected]

Sowore: The Travails Of A Gadfly.

How The Telephone Widens Insecurity In Nigeria

4 thoughts on “When A Literary Disciple Mourns His Mentor”