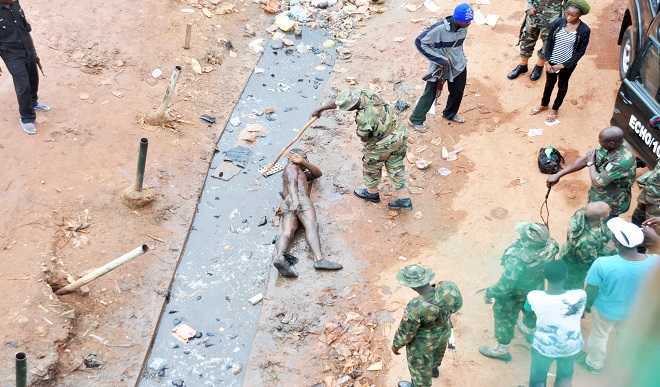 If the reports of Baga falling were untrue, then how can reports of its recapture be compromising?

So Baga did fall! Then why would Nigeria's security agencies lie and spread dangerous fake news that it hadn't fallen, putting its inhabitants at greater neglect and risk, their families and travelers headed there at continued risk and denying the dead, injured and relatives urgently needed attention and even prayers?

We said you would be next. You were next.
They came for PremiumTimes, accusing the news organisation of supporting Boko Haram…

Then they came for Amnesty International, accusing the organisation of working for Boko Haram…

Then they came for United Nations' UNICEF, accusing it of promoting Boko Haram…

Then they serially locked up Deji Adeyanju, accusing him of any and everything, because he protested to demand state security and the de-politicization of our security agencies.

They came for me, accusing me of fraud, for begging the world to come to our aid to feed and properly kit our starving, dying troops.

Now they have come for DailyTrust. You would be next. You are next.

DailyTrust thought that by bowing to tyranny and expelling Farook Kperogi, they will save themselves from tyranny. They learned the hard way that it does not work that way. The only way to save yourself from tyranny is to never bow to it.

When the state security bosses acknowledged their failure to secure the state, they decided that the only option was to bury the reality. But the reality was too big to simply bury so they embarked on a mission to blind the observers… by grabbing the heads of all Nigerians and pushing them into the ground like the ostrich does, so we do not see. A bloody mission.

Will Buhari fire the service chiefs for the ongoing reign of tyranny? Or this will be another case of “I didn't know the IGP pulled the special forces out of Benue against my directive, allowing you die in the hundreds…so he remains IGP?”

I wonder. When will the python dance in terrorized Zamfara?

When will the python dance in bandit, terrorist and kidnapper overrun Katsina and Kaduna?

What has Nigeria even turned into with all this news of a military python dancing? Is this their idea for establishing law and order by intimidation and disorder?

Where are our police, the constitutional law enforcers in all this? Are they mere boy scouts now? With their AK47s? Oh! Of course we remember. The hopefully outgoing IGP revealed that 80% of them have been rented out as bodyguards for the wealthy cabal; thus leaving the masses unprotected. That's why there is martial law in Nigeria, with the army running amok.

Where in the world do you see soldiers acting as police? Have you ever seen a soldier with a handcuff? As Fela sang, Zombie way na one way….to shoot and kill. This is Nigeria, Falz sang. There is no serious policy to restore the police and retire the military to the barracks.

Where in the world do soldiers raid media offices, declare citizens wanted and kidnap them at will? OK, yes, one other country: North Korea.

The media, human rights organisations and activists have become the theatre of war.

And why does the scourge of Boko Haram simply never go away? Well, what happened to the 2000 members Goodluck Jonathan arrested? Buhari set them free with 2-year maximum sentences, releasing most immediately on time already spent.

Others have been released back into the theater of war in swap deals and on “orders from above” as Metele surviving soldiers vented. The rest are released after a so-called “safe corridor” unconstitutionally approved amnesty rehab program. Boko Haram is being recycled.

Has a single sponsor of Boko Haram been arrested? Remember the Borno local government chairmen arrested for harboring terrorists and the like? Their cases were silently closed. Remember Ali Ndume? Well the government failed to bring the involved witnesses to court, deliberately tossing the case against him.

So you see, Boko Haram is now officially a treasured national asset. A protected Nigerian heritage. Tour the north. Visit the theater of war. Experience the “great” Boko Haram warriors and see and smell your blood as it gushes out of you as they shoot rounds of captured Nigerian military ammunition into you.

I hope the president will read this, but someone has said he does not read and does not care when he is read to.

So my dear countrymen, security has been delivered.

Give up your ancestral lands or be buried underneath it, the president said.

After all, what state can be more secured than death?

Are All Our Leaders The Same ?

NEED FOR A STEADY ELECTRICITY IN NIGERIA