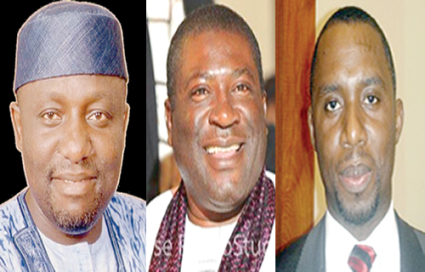 Electoral politics in Nigeria always brings renewed clashes between the greats and party chieftains nationwide. These clashes are often founded on inherited legacy of prior clashes. At other times, they come as vendettas, reprisals or payback antics, especially when party chieftains and stalwarts step on toes of mighty opposites and on structures notch-marked by political volatility. The French all time Wit, William Shakespeare (Hamlet), noted thus: a�?a��Tis dangerous when the baser nature comes between the pass and fell incensed points of mighty opposites.a�?

There are times too, when the party chieftains, godfathers, comprador bourgeoisies, political plinths and stalwarts, as well as politicians aspiring for electoral and appointive positions clash because of difference in ideas and opinions. Yet, as Hubbard L. Ron would say, a�?ideas and not battles mark the forward progress of mankind.a�? Vying for electoral politics in Nigeria has since gone beyond political parties seeing themselves as family and thus packages their resources in marketable platforms and then campaign, as it is in the United States.

One major problem the multiparty system (as operated in Nigeria and especially in Igboland) has is the inability to manage the influx of human leadership-resources flooding the parties. Elections and politics more than every other thing, bring together Statea��s mightiest, who instead of brainstorming how to reposition the society, clash in opinions, interests, choices and visions, and often go gagain image-assassination through paymasters and hired assassination like OGB received in Imo State years past. Their coming together ought to be for unravelling the basic socio-economic trends and problems in their society, how the party manifestoes ought to accumulate the societal challenges, which candidates have best desirable qualities that suit the demands, and how to market the packaging before the electorates.

Instead of the above, Nigerian politicians embark on life-leadership plots, lineage and in-group leadership installation, cabalism and turning State politics into a fiefdom, and thus the resultant Statea��s economy their vassals. In Imo State for instance, electoral politics is not only a do or die affair, but an a�?Ia��m born and doomed to rulea�� one. Who vied and failed must head to the tribunal to make impact and must vie ad infinitum or sponsor job-breakers for perceived foes, and thus becomes not an opposition that checkmates excesses of the rulers, but forms his exclusive in-group. Who vied and won, must win in everything, and carry all the booties of the war home, to his cronies, in-group and cabals, and thus sees the failed co-contestants as out-group and insignificant fellows.

In this season in Imo State, where two politicians clash and fight to finish with their structures and antics, the reason must be clash of party ideas and choices. But as Lady Bird Johnson said, a�?the clash of ideas is the sound of freedoma�? and Adlai E. Stevenson adds, a�?freedom rings where opinions clash.a�? The Imo APC and APGA today have fallen not only into clash of titans, but clash of ideas, opinions, choices and of mighty opposites.

Though plurality of electoral aspirants makes for party consolidations, but it is highly inimical when the party leadership and apex plinths go egoistic and lord over others their personal ideas and choice of candidates. If partyism in Imo State is seen in family-model, why would an outgoing Governor embark on nomination and anointing a candidate as his choice, even provisionally? Oh well, why wouldna��t he! Has he not studied the disunited fronts of both Owerri and Okigwe zonesa�� politicians and thus profits from their extreme selfishness than group synergy to make the Imo West senatorial (Orlu) zone the Imo State Hausa/Fulani in Nigerian politics?

Has Owerri zonea��s gubernatorial aspirants in the State galvanized their political human resources into harmony in order to achieve their desire to ensure the restoration of the equity charter in the State, which has been disrupted for ages now and thus set them at the edge in apex leadership in Imo? In APC, Owerri zone has as seriously minded guber aspirants, the likes of: Eze Madumere, Jude Ejiogu, Chima Anozie, Jerry Chukwueke, Chuks Ololo, etc. In APGA, there are the likes of Frank Nneji, Humphery Anumudu, Senator Bright Nwnanne, Hon Daniel Kalu, Okey Eze, etc. The PDP has Athan Achonu, Emeka Ihedioha, Jude Njoku, etc.

Has Okigwe zone harnessed their house to ensure that their agitating restoration of equity charter in State apex leadership be achieved? Okigwe zonea��s APC has the likes of: Rt. Hon Acho Ihim, Senator Ifeanyi Araraume, etc. In the PDP, there is Chief Ikedi Ohakim, etc. In APGA, there is Ike C. Ibe, etc. Among these candidates, the principle of feasibility and marketability should be matched with the trends of events, political tempo and possibilities before party primary voters.

Each of these aspirants goes on his own way, each being considered as enemy of the other and a challenger. In APGA, there are such mighty weights as Frank Nneji, Ike C Ibeh, Okey Eze, Humphery Anumudu, Linus Okere, Daniel Kalu. All are interested in their personal campaign organisations and divided structures. Who will go and the other not go? a�?To be or not to be, that is their problem.a�� The party booms with resources difficult to harness and pilot to common goal-hunt.

In APC, the worst stands. There are internal polarisations and renewed intra-party fracas. There is still the Onongono syndrome, Agenda syndrome, Rescue Mission syndrome, APGA slide-off camps, CPC and ANPP extensions, the Governora��s Generals circle and Okorocha close confidants sector. There is also the Concerned APC Stakeholders who are now the only trustworthy camp in the party that tries to harmonise all into one aim and family. There may be soonest clashes between Okorochaa��s Generals and close confidants, with the rest of the party.

To achieve the desired goal, which is the restoration of the distorted equity charter in the State, and to present as party flag-bearer a marketable candidate who has what it takes to take Imo State to desired visions, there has to be urgent house harmonisation that eschews rancour and greed in Imo APC and APGA. The PDP in Imo at present purports a more harmonised and better focused centre than APC and APGA.

Virtually all the vying aspirants in APGA and APC have gone solo to their campaign offices in wait of tomorrow and the D-day. They are like introverts to each other. And as Adam S. McHugh once said, a�?When introverts are in conflict with each other… it may require a map in order to follow all the silences, nonverbal cues and passive-aggressive behaviours!a�? It takes the party leadership and house-reforms to harnessing these silently clashing chieftains. As William Shakespearea��s King in Hamlet said, a�?Madness in great ones must not unwatched go.a�? When the political titans clash, their structures and thus followers suffer and defect to nearest parties for accommodation.