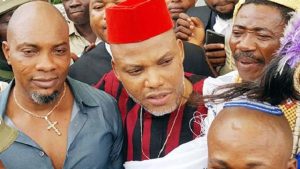 Today I charge all of us in the Media with criminal silence and culpable complicity in the disappearance of Nnamdi Kanu’s saga. Since September 14 last year when Nigerian troops were ordered to brutally invade the home of the leader of the Indigenous Peoples of Biafra [IPOB], now purportedly proscribed, not a word has been heard from the usually outspoken Nnamdi Kanu and all-powerful Federal troops that invaded his home had kept silent about his fate. Is he dead? Is he alive? If dead, where is his corpse? If alive, where is he and what is the state of his health?

About 4 years ago when over 200 Chibouk girls were forcefully abducted by the dreaded Boko Haram terrorist group Vanguard and one or two other newspapers had on their front pages posers and counters reminding the authorities every day about the plight of the unfortunate innocent girls. The posers have since stopped or may have been asked to be stopped by those who felt embarrassed on daily basis by this reminder.

One would have wished though that the reminders were retained as they are very crucial and necessary as a show of solidarity with the agonizing parents of those children. Government should also be kept on its toes until all the kidnapped girls are freed and reunited with their parents. The point of the case is the realization that none of the parents of these children has stopped counting each day of their misfortune as long as their children are in unimaginable captivity. None of the parents has enjoyed sleep since that terrible day when children who were about to write examinations that would better their future ended up in unmitigated captivity and slavery.

No one is amused by the melodrama of the seemingly stage managed ‘kidnap’ of Dapchi girls/boy and their subsequent melodramatic ‘release’ in a most theatrical absurdity. In fact there is no basis for comparison between the horrible abduction of the Chibouk girls and the merry tale that got dramatized last month by puppeteers.

But the assault on Nnamdi Kanu’s community was real and substantial. It was premeditated and clinically executed. Until that attack Nnamdi Kanu was about the most charismatic leader Nigeria has seen in decades. No leader in Nigeria today can boast of the huge voluntary and committed followership which Kanu enjoys. Forget about rented crowds and one-million-two-million-man march that politicians purchase with dollars and Naira as their ego trips demand.

Nigerians should demand from the Military and their pay master the Federal Government, what has happened to Nnamdi Kanu. A country moving dangerously towards fascism and tyrannical dictatorship must be put in check by the people. As fathers and mothers we should be asking ourselves what our reactions would be if Kanu were our son or his community our community. We cannot continue to play the ostrich and continue to sweep matters of national importance under the carpet.

We do know that we are all in trouble and endangered when with our eyes open we tolerated a situation where the security architecture of a country is kept in one tiny section of the country and decisions about our security and safety are taken by a cabal of self seekers. Nnamdi Kanu does not brandish AK 47 rifles, he does not parade machetes nor do his followers engage in massacres and gang rape.

I hereby reproduce a report published by The Nation newspapers in which Kanu’s lawyers posed the same question about Kanu’s whereabouts since September 28 2017. Written by Eric Ikhilae in Abuja the lawyers had challenged the Chief of Army staff to produce Nnamdi Kanu without delay. Regrettably, that demand to the best of my knowledge had been treated with similar contempt issuing from arrogance of power. Here is the report:

Leader of the proscribed Indigenous People of Biafra (IPOB) Nnamdi Kanu has asked a Federal High Court in Abuja for an order of Habeas Corpus ad subjiciendum , commanding Chief of Army Staff Lt.-Gen. Tukur Buratai to produce him in court.

The request is contained in a suit filed in his name yesterday by some lawyers, led by Ifeanyi Ejiofor.

Part of the grounds for the request include that Kanu has not been seen since some soldiers allegedly invaded his house on September 14.

The plaintiff stated that Kanu, who was in the house when the soldiers came, had not been heard from or seen since then.

a�?The invading soldiers in their desperate bid to ensure that the applicant (Kanu) is caught in the attack, climbed stairs to his bedroom upstairs to shoot him; walls of his bedroom were riddled with bullets.

a�?The invading soldiers, who had direct contact with the applicant on this fateful day (14th day of September 2017), should be in a position to produce the Applicant before the court. It is either the Respondent’s rampaging soldiers abducted the Applicant during this raid or must have killed him in the process.

a�?Section 40 of the Federal High Court Act empowers this court to order that a writ of habeas corpus ad subjiciendum be issued on the respondent to produce the applicant in court, particularly now that his substantive criminal trial is coming up on the 17th day of October, 2017.a�?

The plaintiff stated, in a supporting affidavit, details of what allegedly occurred during the attack on Kanu’s residence and the circumstances leading to his purported disappearance.

A lawyer, Mandela Umegborogu, said he learnt from Kanu’s younger brother, Emmanueal a�?that the soldiers, who also drove in a purpose-built sophisticated armoured personnel carrier, fired live bullets on the relatives of the Applicant, leaving scores brutally wounded, and arrested many.

a�?During the bloody attack/invasion of the applicant’s home, scores were killed and others forced to abandon their sleep and run for cover in nearby bushes, which include nursing mothers, pregnant women, children and the aged.

a�?On that same day, the 12th day of September, 2017, dozens of supporters of the Applicant who were on a courtesy visit to him, were also barricaded at Isialangwa and tortured on the same day.

a�?The applicant was emotionally traumatised and visibly tortured on account of heavy causalities recorded in this unprovoked attack from the invading soldiers.

a�?On the 14th day of September, 2017, the Nigerian soldiers invaded the applicant’s home for the second time, unfortunately on a brutal but murderous raid that left 28 persons dead and over 48 arrested and taken away to an unknown destination.

a�?The applicant was sitting right inside his bedroom when the soldiers invaded his home. The soldiers, in their desperate efforts to ensure that the applicant who is their main target is gunned down, climbed the stairs to his bedroom upstairs to shoot him.

a�?The wall of the applicant’s bedroom is riddled with bullets holes till date. Attached and marked as Exhibits EK1, EK2, EK3, EK4, EK5 EK6, EK7 and EK8 are photographs showing with sufficient clarity the impacts of this assault on the Applicant’s home.

a�?The rampaging soldiers burst into the room of the Applicant in the course of this bloody attack and shot at everything on sight, including living objects. Attached and variously marked Exhibits EK9, EK10, EK11, EK12, EK13 and EK14, are the photographs and video footage evidencing this dastardly attack on the home of the applicant, including the bullets holes in his bedroom.

a�?The Respondent and his agents are fully aware that the applicant will return to court on the 17th of October 2017 to stand for his trial in the case above mentioned.

a�?The applicant has never been invited by any security agency to response to any criminal allegation before this unprovoked bloody assault in his home.

a�?The murderous raid in the home of the Applicant is targeted at eliminating him and not to arrest him.a�?

All men and women of conscience, all mothers and fathers, and all grandparents who put unquantifiable value on the lives of children and fellow human beings should put pressure on the President of this country to order General Buratai to produce Nnamdi Kanu. And politicians who are always crazy about elections, positions, power and privileges and who were/are party to the Nnamdi Kanu’s disappearance saga should bury their heads in shame.

The pen is the tongue of the hand,the silent utterer of words for the eyesa��Henry Beecher

Improving The Capacity Of The Nigerian Police To Investigate Crime

For a more robust Senate

12 thoughts on “Where is Nnamdi kanu? By Tola Adeniyi”