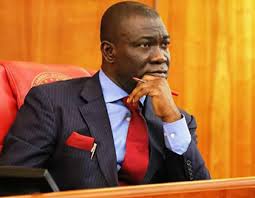 The recent protest in Germany in which Former Deputy Senate President, Ike Ekweremadu, was harassed, chased around, subdued, and beaten naked like a palace pickpocket brought big shame to Nigeria, and the senator must own full blame. Even a novice could have discerned that the popularity of the #RevolutionNow, led by Omoyele Sowore, shows that the Nigerian masses are not fools and will not endure abject injustice forever. They are gradually recognizing their true problems and real enemies. The masses are keenly aware that Ekweremadu has been a recurring decimal in the gross misrule of the country in the 4thRepublic, particularly in the South-East zone.

A fifth-term term senator, Mr. Ike Ekweremadu is a malignant narcissist masked by a boy-scout persona, yet any dig into his record readily exhumes mess and miasma to boot. He has only managed to sustain power through fake popularity, buoyed by a montage of propaganda, mass deceit, political bribery and brigandage and, of course, a vicious army of well-educated and well-paid bootlickers, made possible by an overflowing wealth accumulated without sweat. I must admit that I was once gullible to the propaganda and consequently became one of Ekweremadu’s biggest boosters.

The trust dramatically waned after I penned him a letter following the election of 2011. Since he was the political leader of the South-East to the centre, I specified important projects in the zone that could mold his name into gold, namely, Enugu Airport; Enugu/Port-Harcourt, Enugu/Onitsha, and Onitsha/Owerri highways; 2nd River Niger Bridge; and an additional Igbo state. I am yet to recover from the shock I felt when Senator Ekweremadu thundered back, suggesting that I was an ingrate. To him, instead of worrying about public projects, I should be grateful for life that he hired my brother as his adviser, supported my cousin’s election to the Federal House, and graded the pavement leading into my country home. But Ekweremadu forgot that we both must first pass through the roads plied by the masses before striding into our mansions. Lo and behold, yet very unfortunately, the senator would lose his beloved brother, Chukwuemeka, to motor accident caused by potholes on the same Enugu/PH highway on December 23, 2012. This experience contributed to my piece, “Every Nigerian Blood Is On The Line”

The last straw took place in 2013 at Houston, Texas. I had organized a meeting between Ekweremadu and the leaders of Igbo Peoples’ Congress while he was in the city on the invitation of Greater Awgu Leadership Forum (GALF). When confronted about why he had not shown up at the Igbo meeting, he retorted that the size of the crowd was not large enough to deserve his presence, and he never showed up. Ekweremadu’ apparent insult on the Igbo made me furious, obviously, but that is nothing compared to what follows.

A night before the aborted Igbo meeting, the senator was kind to have presented the Awgu people copies of a fat pamphlet, titled “Accomplishments & Constituency Projects Attracted by His Excellency Senator Ike Ekweremadu, CFR”. Interestingly, the number one on the list (S/N. 1) was a library he claimed to have attracted in the year 2009 to my town, Ugbo, under MDGs Quickwin. I quickly called the town union to inquire about the library and other projects on the list—only to find out that no such things existed and still do not exist. I made similar inquiries around the constituency and other parts of South-East where projects were supposedly attracted. I received similar result—phantom. Even in some cases with traces of such projects, they were uncompleted and totally abandoned. After his tawdry refusal to explain the contradictions, I made my findings public.

Since then, I have been a marked man. He not only unleashed a global campaign of calumny against my person and businesses, he is on record to have threatened my life. I will never wish my worst enemy the most immoral sight of Ike Ekweremadu laughing and jeering, while my dear mother, a septuagenarian, knelt in full glare of a national TV, appealing to the senator not to hurt her son—for daring to question his representative in government. The date was December 27, 2013. As if that lacked in folly, Ekweremadu commanded his toadies in the district, including some “autonomous” royal fathers, such as Igwe Lawrence Chime of Ugbonabor and Igwe Jerome Okeke of Ngene Ugbo to publicly denounce me for daring to oppose their Excellency.

This last election season, obviously rattled that my presidential bid could inspire opposition in the constituency and threaten his ageless grip on the people, Ekweremadu sponsored his aides to tear down my posters around Enugu State. They even had the audacity to invade my country home on August 10, 2018, beating up my campaign officials, as well as some family members. It took the timely intervention of Ugbo youths to avert counterattack and bloodshed. Of course, I alerted the senator and some relevant authorities in the state. Besides the President General of Ohaneze Ndigbo, Nnia Nwodo; and Ogbuagu Anikwe, the spokesman of Governor Ifeanyi Ugwuanyi, who registered strong displeasure; Ike Ekweremadu never apologized nor condemned the thuggery. But this pattern of do-or-die, remember, is how he has sustained power.

The bigger problem, however, is that no part of the South-East has seen any tangible development the 12 years Ekweremadu held the power. Today, the only major public attraction in his entire local government is his mansion at Mpu, being one of his 32 choice properties currently under criminal investigation. Today, the three major roads that traverse his constituency, namely, Enugu-Onitsha, Enugu-PH, and Awgu-Oji-River highways are among the ten worst highways in the country. Today, most major projects in Igboland have only been good for election propaganda and money-spinning by the area politicians through series of funded but abandoned contracts. Needless to mention that the Part II of this essay will demonstrate how Ekweremadu used and dumped the Indigenous People of Biafra (IPOB) for his personal interest.

Ekweremadu’s imprint at the national level does not need to be retold here. Consider, for instance, his ignorable role as a ringleader in the third-term plot to derail our democracy and elongate Obasanjo’s tenure. Combine the subversive act with the fact that Ekweremadu was one of the brains behind the jumbo salary for Senators, as well as the Constituency Project scheme, which has cost the country trillions without any meaningful project to show. Further, despite being palm handed N10 billion under President Jonathan to influence the amendment of the Constitution towards restructuring, including the additional states and local governments, the only result Nigerians have seen are tales after tales.

It is clear the grievances against Ekweremadu by IPOB are profoundly justified. But physical assault must be condemned as well. Petitions, picketing, booing, jeering, and heckling are proper. In fact, the nature of the German protest remains at risk of turning Ekweremadu, the villain, into a victim. Notice how he quickly resorted back to his familiar mélange of propaganda and profligacy upon arrival in Nigeria, shamelessly chartering aircrafts, renting ever-ready crowds, and portraying himself as a hero—for being disgraced on his plot to remain Deputy Senate President for life and later flogged naked at a fake New Yam Festival in faraway Germany, while his direct constituency is under siege by terror herdsmen.

The Nigerian masses, particularly the Igbo, have suffered massive neglect the last 12 years Ike Ekweremadu held sway as the de facto Senate President. But the senator is not alone. The Diaspora Nigerians should, therefore, unite and quickly initiate a Hall of SHAME where the likes of Ike Ekweremadu deserve a permanent place. Yes, it portends a crime against the humanity to continue to allow Nigerian corrupt leaders to enjoy freedom in foreign lands if they cannot guarantee freedom for the masses in their homeland.

SKC Ogbonnia, a 2019 APC presidential aspirant, is the author of the Effective Leadership Formula.

125 thoughts on “Why Ekweremadu Belongs to Hall of Shame (I)”