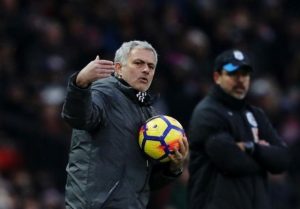 Jose Mourinho likened breaking down Huddersfield Town to knocking down the Berlin Wall.

Manchester United beat the Terriers 2-0 at Old Trafford on Saturday,  but had to wait for the second half to get their breakthrough.

Romelu Lukaku  volleyed home the opener and Alexis Sanchez scored the second, his first United goal, as his penalty kick was saved but he knocked home the rebound.

Speaking to the media after the game, here’s what Mourinho had to say about a tough win.

a�?We always had control of the game, but at half time it was 0-0. I guess we had around 85% possession in the first half but it was not enough,a�? Mourinho said. a�?We kept doing the same in the second and even at 1-0 we were totally in control. Our defensive line as far from the danger areas. We had to be patient but had to keep the intensity high and the pressure. We had to break down the Berlin wall organised so well by  David Wagner .a�?

a�?Old Trafford is a quiet stadium. It is not Portsmouth. Here the atmosphere is a bit quiet. The players they like to play at home,a�? Mourinho added.

United had 74 percent of the possession and 16 shots to Huddersfield’s four, with Mourinho getting a response from  Paul Pogba  who was superb when he came off the bench after being dropped following the 2-0 defeat at Tottenham in midweek.

a�?I changed a few players. It wasn’t to punish anyone. If it was about punishing I would be punished too because we are a team,a�? Mourinho said. a�?Pogba is a fantastic player. One of most talented in the world. To sit on the bench one day is not the worst thing in the world.a�?

Mourinho also said it was a�?nicea�? to see Sanchez score his first goal for United and recapped an emotional day for the club as commemorations were held to mark the 60th anniversary of the Munich air disaster.

a�?It is important for the bad reasons (Munich air disaster) but the memories stay. The club looks at the date and event as a key moment in the history of the club. It is nice to do that playing at home and winning,a�? Mourinho said.

Mourinho’s mind games continue as he conceded the Premier League to Man City in his press conference on Friday, but United’s manager now sees his side just 13 points behind City as they strengthened their grip on a top four finish.