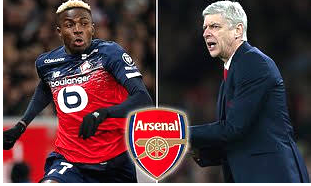 Super Eagles, rave of the moment, Victor Osimhen has revealed why he could not seal a move to premier league giants, Arsenal in 2015.

He held talks with former Arsenal manager, Arsene Wenger in 2015 after playing a pivotal role in Nigeria’s U-17 World Cup glory in Chile.

Osimhen joined Bundesliga side, Wolfsburg in 2016 after he was linked with the likes of Barcelona, Inter Milan and Juventus.

The former Golden Eaglet striker found life difficult in Germany and he was eventually sold to Charleroi in Belgium.

Osimhen impressed at the Belgian club and he subsequently sealed a move to Lille in the summer.

He has been impressive in his first season in France, scoring 18 goals and recording six assists in all competitions including a goal against Chelsea in the Uefa Champions League.

The 21-year-old has been linked with a move away from Lille, big clubs in Europe are reported to be eyeing a swoop on the Super Eagles striker.

“I spoke with Arsene Wenger after the tournament ended and he wanted me to come to Arsenal,” he told the Independent.

“I had a lot of options. Barcelona, Inter, Atletico Madrid, Juventus and the rest.

“Arsenal was a good option but it wasn’t the best at the time. I wanted to start playing as soon as I turned 18.

“I wanted to go to a place where I had time to invest in my game and improve physically. Wolfsburg showed me that possibility.”

Osimhen has scored four goals in nine appearances for Nigeria.

How Motlop can solve all Geelong’s problems

677 thoughts on “Why I Rejected Arsenal Move – Victor Osimhen”