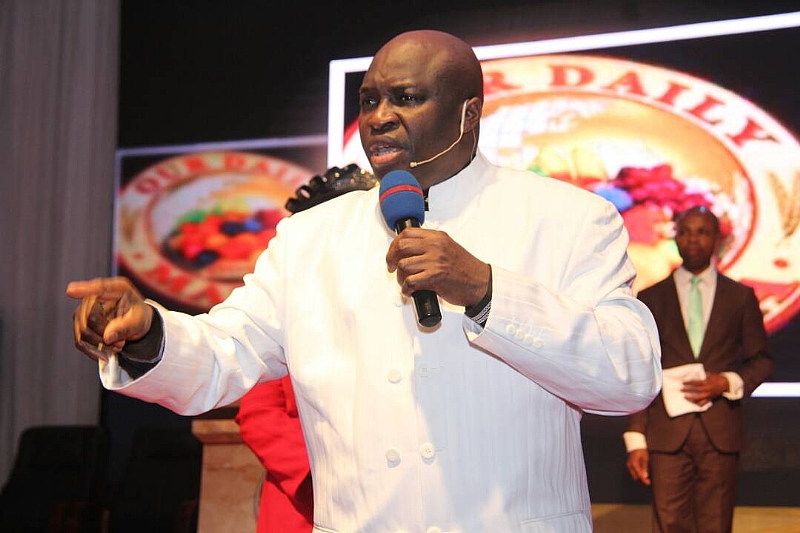 In protest against the alleged killing of many Nigerians by suspected herders and in solidarity with their grieving family members, the General Overseer of the Manna Prayer Mountain, Dr. (Bishop) Chris Kwakpovwe who is also the author of the popular daily devotional, Our Daily Manna denied representatives from The Presidency, Lagos and Delta state governments the usual honour accorded them at the ministrya��s annual World Anointing Night at the Tafawa Balewa Square, Lagos recently.

The functionaries of government were politely requested to stay away from the annual gathering of hundreds of thousands of worshippers.

Last year, the Chaplain of the Aso Rock Villa, Pastor Oluseyi Malomo represented Vice President, Professor Yemi Osinbajo. The Speaker of the Delta House of Assembly represented Governor Ifeanyi Okowa, while also appearing in his own capacity. The wife of the Governor of Lagos State, Mrs. Bolanle Ambode was present as well.

This year, however, Kwakpovwe shocked the throng of believers when he announced that there was no place or special recognition for government functionaries at the meeting. This was a clear departure from the previous practice of allowing these Very Important Persons the privilege of addressing the crowd.

Visibly angry, Kwakpovwe said, a�?We are all stakeholders in this country. We cannot keep quiet when people are being slaughtered like animals. Some pastors are saying we should buys guns and fight them back. That is not the way to go. We have a weapon that is more lethal than guns. Mugabe was removed in a way that nobody can understand. When we come together like this, we have the authority to command things to happen. Who is buying those AK47 guns for the herders? Who are their sponsors? I declare that God is going to do a new thing that will shock people in this country. The killing is too much. Are we at war?a�?

The programme which was streamed live to over 200 countries witnessed a tumultuous thunder of, a�?Amena�? from the congregation to his prayers against the sponsors of the killer herders. Kwakpovwe prophesied that a�?in six months from now, the sponsors of these killing spree all over the country will lose their hold on power. They will be exposed. They will fight themselves. There will be confusion in their camp.a�?

In an atmosphere of praise and worship featuring Pastor Kunle Ajayi on the saxophone, Praise Channel and the Manna Mountain Voices, there were evidence of diverse miracles of healing from different diseases and freedom for those who were possessed by demons. Persuaded by his team, Kwakpovwe later allowed the representative of the wife of the Lagos State Governor to present a sealed copy of Her Excellencya��s speech (but it was not read) which he received with thanks.

Firing more shots at government at different levels, Kwakpovwe said, a�?many governors are my friends, but I do not take contract from them. The Lord warned me against it. I do not need money from government. If you take money from politicians you cannot speak against them when they go wrong.a�? The programme was held under the theme, ‘Change of Garment’ and the worshipers were encouraged to carry out a symbolic tearing of their clothes representing life circumstances that do not want to be associated with.

God Will Punish PDP For Perpetrating Corruption While In Power, Buhari Prays