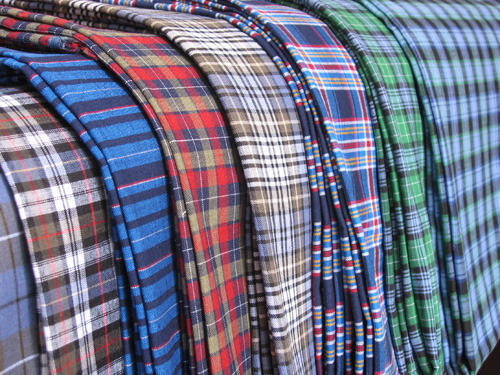 The current romance with Chinese authorities by the Federal Government and higher propensity for foreign textile materials, among others have been identified as major reasons for concerns over recent alert of possible influx of carcinogenic school fabrics and related items into the country by the Standards Organisation of Nigeria (SON)

Beside the currency swap, which has opened the country to massive importation of household and electrical appliances from China, most school proprietors are currently in competition over colourful textile materials as uniforms, leading to colour becoming an important aesthetic factor in the fashion industry.

Consequently, different colourants including dyes and pigments are used for the colouration of fashion articles such as apparel, textile, footwear and accessories.

Infact, relevant authorities regulating education both at local, state and national levels must be on high alert over possible influx of carcinogenic school fabrics and related items into the country from China after some uniforms made in China but dumped in Hong Kong was red flagged by SON, recently.

Sunday INDEPENDENT’s investigation has gathered that the said ‘poisoned’ material may not just be restricted to school uniforms alone as reported by SON, but also extended to school equipments like toys for kindergarten and nursery pupils and other school items made of synthetic fibres. Even more worrisome, as discovered by the newspaper, mushrooming schools in a bid to stay competitive now import basic school items like uniforms, toys and other school items from China.

“The Hung Kong alert is just warning we must heed especially as Nigeria further deepens ties with the Asian country. As we speak, representations have been made by various teachers associations to the ministry over the matter and I can assure you that we are taking it seriously,” explained a Federal Ministry of Education source who spoke to the newspaper after moves to get the minister, Adamu Adamu, proved abortive.

SON, despite being the one that raised the alert says it is not letting go of the matter.

“Our State offices nationwide are on alert to receive information on any suspected clothing materials for regulatory action viz sampling, laboratory tests and analysis: keep on hold from further distribution and possible seizure and destruction if found not conforming,” says, Bola Fashina, SON spokesperson, in a response to Sunday INDEPENDENT inquiry.

Speaking further, Fashina, who says the organisation is ready and at alert equally advises that, “It is imperative that all stakeholders in the education sector be on the alert to inform us if there is any strange importation of this kind for SON to take appropriate measures to protect our children and that is why a Child Cancer Donation Program will be impulsed by the families of the affected children.”

Last week, Director-General, SON, Osita Aboloma, in Abuja, alerted the country on the discovery of some cancer causing (carcinogenic) uniforms in Hong Kong. Aboloma warned importers of fabrics especially school uniform materials into Nigeria about the cancer-causing substances found in some school uniform materials made by China based companies. SON identified the cancer causing agents in the fabrics as Azo dyes.

Sunday INDEPENDENT further learnt that Azo dyes are used in dyeing textile fibres, particularly cotton but also silk, wool, viscose and synthetic fibres. They are considered to be easy to use, relatively cheap and to provide clear, strong colours which are now serving as greater attractions to most school proprietors so as to have competitive edge.

Also, different colourants including dyes and pigments are used for the colouration of fashion articles such as apparel, textile, footwear and accessories.

Azo dyes also have large applications with synthetic fabrics, which are textiles made from man-made rather than natural fibers. Examples of synthetic fabrics include polyester, acrylic, nylon, rayon, acetate, spandex, lastex, orlon and Kevlar.

The trouble with Azo dye, according to sources, is that some of its amines, i.e. chemical substances it releases, are carcinogenic especially when the wearer sweats or is ingested especially when kids put toys or fabric dyed with Azo in their mouths.

In garments, the sources of banned amines are all coloured items such as polyester buttons, beads and sequins, zipper fabric, sewing threads or yarns, base fabrics and leather components. Azo dyes releasing specific amines (under certain conditions) are restricted in the EU, China, India, Egypt, South Korea, Taiwan and Vietnam. The amount of a banned amine that can be detected in the finished articles is limited to either 30 mg/Kg in the EU and 20 mg/Kg in China. Several brands have a Maximum Allowable Concentration on finished articles as 20 mg.

But the sample found in Hong Kong, according to SON, contained up to 173 milligrams and 41 milligrams per kilogram of the tested samples respectively. Further clarifying the matter, SON said that the amounts of the dye contained in the materials were well above the maximum allowed in the standard. “Use of the 4-amino azo dyes have been banned in Europe, Japan and other parts of the world prior to the finding.

“Azo dyes could release carcinogenic substances known as aromatic amines when they mix with sweat, which accounted for the ban on the use of the dye in many countries of the world,” explained Fasina. The standards organisation further named the companies producing the materials as Sing Shun Fat School-Clothier Company and Zenith Uniform Company.

Despite SON’s promised of vigilance, most Nigerians are worried that the current romance with Chinese government has the potential of mass importation of materials, thereby beating the vigilance of SON and other security agencies at the ports.

Similarly, the organisation is worried that some of the materials may have found their way into the country and hence advised Nigerians to report any suspected uniform materials that may already be in the country to SON for necessary sampling, laboratory tests and analysis to be carried out at its Textile and Leather Laboratory in Kaduna.

A statement from the office of the DG, SON, Osita Aboloma, disclosed that the Azo dyes which were found in some school uniforms in Hong Kong contained up to 173 milligrams and 41 milligrams per kilogram of the tested samples respectively, which were well above the maximum allowed in the standard. Use of the 4-amino azo dyes have been banned in Europe, Japan and other parts of the World prior to the finding.

He alluded to a circular on the subject from the office of the Secretary to Government of the Federation stressing that SON will continue to work with other sister agencies like the Nigerian Customs Service and the nation’s Security apparatus to protect Nigerians from the negative effect of substandard products.

According to the statement, Azo dyes could release carcinogenic substances known as aromatic amines when they mix with sweat, which accounted for the ban on the use of the dye in many countries of the world.

He further advised Nigerians to report any suspected uniform materials that may already be in the country to SON for necessary, sampling, laboratory tests and analysis to be carried out at its Textile and Leather Laboratory in Kaduna for necessary regulatory action.

SON, on its part has embarked on market surveillance and purchase of school uniform materials across the country for tests and analysis at its Textile and Leather Laboratory in Kaduna, he said.

The statement concluded that all international accredited firms (IAFs) undertaking the off-shore conformity assessment programme on behalf of the SON all over the world have been put on alert regarding the cancer-causing substance in school uniform materials and other clothing materials to be imported into Nigeria.

Apart from worry by SON, some industry experts say that the development should be wakeup call on stakeholders to do something on the comatose state of the textile industry in Nigeria. Nigeria’s textile industry was once a thriving part of the nation’s economy. The industry was once the country’s second-leading employer of labour, with mills spread throughout various states supported by local cotton farmers. But the industry today is in shambles, resulting from a variety of factors, including internal strife, an influx of cheap Chinese fabrics and pests that plague cotton growers.

Unrestricted importation, poor policies, and inclement industrial environment are some of the reasons blamed for the collapse of textile industry in Nigeria. But more recently, the influx of cheap textile materials especially from China is said to have put the nail on the coffin of the industry. The situation, says insiders in the textile workers union, is so bad that most of union executives are reportedly on payroll of Chinese companies who import fabrics into the country.

The agreement between Galaxy Backbone Limited and Huawei Technologies Limited (HUAWEI) was at the cost of 328 million dollars facility to be provided by the Chinese EXIM Bank.