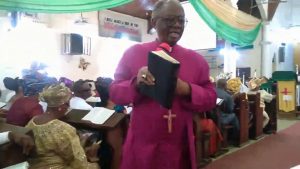 The Archbishop of the Ecclesiastical Province of Niger Delta of the Anglican Communion, The Most Reverend Tunde Adeleye has called on President Muhammadu Buhari to resign. He said the president had not been able to galvanise good support from the larger majority of Nigerians for his government.

He said Buhari’s close aides and appointees had deceived the president to fail. “If I meet the president today, I will tell him in plain language that he has failed and must resign. This is because his advisers and aides have deceived him. So many things have gone wrong in this country in recent times. There is louder outcry.”

He said as a result of poor advice and misgovernance, the country had failed and could soon explode if the president remained without adhering to popular advice and yearnings.

The Archbishop, while speaking at the Cathedral of the Holy Trinity in Calabar on the preparations by the Communion for this year’s synod, touched extensively on the state of the nation.

He insisted that the unity of the country must be renegotiated and that restructuring was the best bet, stressing that the present structure was obsolete.

“Nigeria is ripe enough for restructuring. The present structure is obsolete and carry us far. Restructuring will affect some old structures of Nigeria’s sociopolitical and economic policy. It will involve honest dialogue.

“There is now injustice, marginalisation, resulting to a failed state. We, therefore, need to ‘redesign’ Nigeria,” he stressed. (Daily Trust)