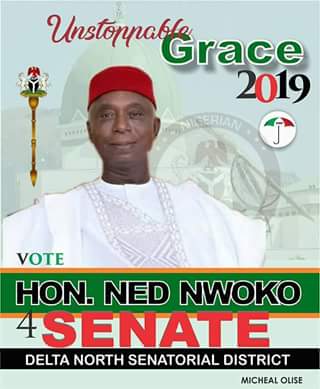 There are two prominent persons who are contesting for the Delta North Senatorial District slot come 2019 general elections. These two individuals are respected sons of the Anioma land. However, the people of the zone are watching the unfolding event to see who would eventually emerge as the candidate of the ruling Peoplea��s Democratic Party (PDP) in the zone.

The Senate is the highest law making organ of the Federal Republic of Nigeria. It is supposed to be composed of the best brains drawn from the 36 states of the country with three members from each state making a total of 109 Senators.

These people take crucial decisions and make laws for the lives and welfare of over 190 million Nigerians. In making such decisions, if the best brains are not there, you can imagine the proportion of damage that could be done to the lives of the Nigerian people. The pains Nigerians are passing through today, largely emanated from the people who have little minds but occupying offices that are bigger than their brains and they could not fashion out the best for the Nigerian people. They take unilateral decisions undermining the welfare of the rural or the grassroot dwellers. As far as the decisions do not affect their families, other Nigerians must accept the verdict.

They appropriate huge wealth to themselves without considering the welfare of their constituents. This is why a senator could go home monthly with over N13 million when the ordinary civil servant who is the executor of the programmes and policies of government going home monthly with as little as N18, 000. Some Senators who receive N200 million for annual constituency projects never accomplish anything for their people for the period of four years they serve as Senators. No wonder, some are being stoned when they visit their constituencies because they are considered as failed Senators. They make no impact in the lives of their people.

All the promises many of them make are never fulfilled and they have reasons to cover up their poor representations and the gullible constituents are made to swallow their lies hook, line and sinker. They give series of complaints why they cannot meet the needs of their people. And for four years, they have nothing to show for their stay in the National Assembly. This is where Prince Ned Nwoko will make a great and unbeatable difference in Delta North. Prince Nwoko is a man who understands the feelings of his people and is ready to meet the needs even at his own personal expenses. He has done it on several occasions. It is never new to him.

Prince Nwoko, as an individual, has achieved a lot for the people of Delta North even while he is not in the senate. He is an accomplished international lawyer, an astute politician, one time honorable member of the Federal House of Representatives, a farmer, a tourism practitioner and philanthropist extraordinary. He is moved by a mission for education, and to mobilize the youths towards national development, using every avenue and tool to impact on the development and empowerment of the youths and women of his constituency.

Prince Nwoko a diehard patriot of Nigeria as a nation, has over the years, generously assisted all whom he came across both financially and materially. As an honorable member of the House of Representatives, he had donated his salary and allowances into the empowerment and education of youths of Delta North. With an open door policy, he has availed himself to all in need. Not satisfied, Prince Nwoko established the Ned Nwoko Foundation in pursuance of his drive to reach out to more and more Nigerians, especially people from his senatorial district.

With his international legal experience and exposure, the philanthropist appears more cosmopolitan and very well polished in character, appearance and conduct. His western lifestyle with British education and culture puts him at a vantage position in the pursuit of the Anioma agenda. As it is now, the Anioma area of this multi-ethnic Delta state needs a strong, people centred and purpose driven representative to champion the cause of the people and be their mouth-piece in the National Assembly.

Ned Nwoko has some fine qualities which are rare among many politicians in Nigeria. One, he is easily accessible. Everyone who has got contact with him can prove that Nwoko is the most accessible high profile politician in Delta state. His phone number is with whosoever is interested and when a call is put across to the Idumuje Ugboko Prince, he answers the call whether he has the number in his phone or not. And when a text message is sent, Nwoko will definite give a feedback, whether the individual is known to him or not. This quality is missing in the lives of over 80percent of politicians in Nigeria. Many who were friends to the ordinary and low level Nigerians, as soon as they ascend the seat of power, that friendship tie is badly severed. This is not so with Nwoko.

With his international exposure, Ned Nwoko is open to everybody across the nation. A case of this is shown when he was in the House of Representatives. In 2001, a staff of Nigerian Ports Authority (NPA) had issues with the NPA and the staff was sacked unjustly from the Ports Authority. Nwoko took up the case and pursued it until the individual was re-instated, irrespective of the fact that the individual was not from his constituency. This shows he has a large heart for everyone. As far as the issue is brought to his knowledge, Nwoko must pursue it to a logical conclusion; he spends his fortune to ensure justice is done.

To rebuild Anioma land and restore its lost glory, the zone needs people with the best brains to take over the affairs of the area in the National Assembly. It is possible to make Anioma the best place for tourists and following his wide exposure and international connections, Ned Nwoko stands to be the best person to take the zone to that level of Eldorado. There is nothing impossible in this world; it is only the political will to carry out the task that is lacking in many politicians across the country.

It will interest you to know that Nwoko, while he was in the House of Representatives, was able to achieve the following to his credit. Prince Ned Nwoko donated his four years salaries and allowances for his scholarship programme to the students of Aniocha/Oshimili federal constituency.

A village in Anioma known as Ukala in Oshimili North and its environs was given electricity courtesy of Prince Ned Nwoko. Nwoko facilitated the dualisation and completion of the Asaba/Benin express way with high attention on the project. It was Nwoko who also facilitated the building of the NTA station in Asaba. He was in the House of Representatives between 1999 and 2003. It must be stated that while he was in the House of Representatives, Nwoko devoted himself to serve his fatherland and his people, not necessarily for money making as many do. He spent his time building the democratic institutions that would become legendary in bringing about prosperity to Nigerians.

In the days when the military ruled, holding Nigeria to the jugular, Nwoko, being a legal practitioner in London was one of those who spoke for the international interest of Nigeria. Since he left the political terrain in 2003, the country has continued to benefit from his wealth of experience. One major area he has actively helped Nigeria outside politics is the role he played in the payment of the Paris Club refund to the Nigerian government. He personally led the team that battled the foreign countries which invariably led to the growth of the Nigerian economy.

The Paris Club refund which seems to have provided relief to states and the Nigerian government was the brainchild of this Ned Nwoko. Many Nigerian states had almost collapsed financially but they regained their financial strength due to the Paris Club refund. The role played by Nwoko, chairman of Linas International Ltd, opened the opportunity for the economic uplift of Nigeria since 2015.

His team which battled the western countries, passed through difficult times dealing with the creditor countries. He encountered series of challenges so as to compel the creditor countries to refund the excess deductions from the Nigerian government. He received threats while some sent security agents after them. He carried out series of investigations and discovered a lot of funds that were over deducted from the Nigerian state.

Many states that are enjoying the Paris Club refund today were non-existent when the loans were contracted. Today, they have suddenly found themselves enjoying repayments for loans they didna��t know when they were contracted. It will interest you to know that Nwoko and his team pursued the Paris Club refund for 10 years beginning from 1992 to 2002. Many states which are unaware of the battles they fought are treating the refund as mere windfall for their states to enjoy.

The 774 local government areas that never contracted any foreign loan were grouped into the repayment. Some of the loans were seen to be of dubious origin while some of the international banks resisted them but they persevered and the nations were finally defeated and today, the Paris Club refund has helped to grow the economy of Nigeria.

This is the man who is coming to represent Anioma land in the National Assembly. If he could fight for the entire Nigeria so as to compel the foreign banks to refund the excess deductions from the Nigerian government, be rest assured that Hon. Prince Ned Nwoko will do more for the Anioma land. Anioma land has only nine council areas. It is too small compare to 36 states and 774 local government areas in Nigeria.

While in the House of Representatives, he was a very effective member, he delivered his positions with insight and vision unparalleled amongst his peers. Some of the bills he introduced in the floor of the house were the bills that led to the establishment of some agencies and institutions in the country.

He has always been a man driven by the passion for public service and philanthropy. He made national headlines in 1999 when he announced that he was donating his salary and allowances, including the much-heralded furniture allowance to members of his constituency. We can be rest assured that Prince Ned Nwoko is a man of his words. He is man already; he does not need the money from the senate to earn his living. His mission is for the people of Delta North.

SPECIAL ONLINE RESEARCH BY MEMBERS OF INTEGRITY AND DEVELOPMENT INITIATIVE