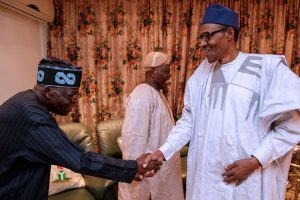 All Progressives Congress National Leader, Asiwaju Bola Tinubu, on Tuesday said that his visit to President Muhammadu Buhari was not connected with the critical statement issued by former President Olusegun Obasanjo on Buhari’s presidency.

Mr Tunde Rahman of Tinubu’s Media Office said the visit by Tinubu and Chief Bisi Akande, former governor of Osun State, to the Presidential Villa was scheduled since last week.

a�?President Buhari periodically schedules talks with Asiwaju Tinubu and Baba Akande, as he does with other Nigerians and APC figures, to discuss substantive issues pertaining to the governance of the country and matters concerning the party.

a�?This visit was one of such meetings. As such, the meeting had nothing to do with the statement of former President Obasanjo.

a�?It is totally unconnected. At the time of the meeting, Tinubu and Baba Akande were even unaware that President Obasanjo had released his statementa�?, Rahman said.

Former President Obasanjo, in a statement released today urged President Buhari to abandon the idea of seeking re-election in 2019.

In the diatribe, which he entitled, a�?The Way Out: A Clarion Call for Coalition for Nigeria Movementa�?, Obasanjo claimed Buhari has performed far below expectation and should honourably a�?dismount from the horsea�?.

Obasanjo urged the President to join the league of the country’s former leaders whose a�?experience, influence, wisdom and outreach can be deployed on the side line for the good of the country.a�?

Obasanjo, a two-term president on the platform of Peoples Democratic Party (PDP), said he felt disappointed by Buhari, whom he supported during the 2015 election over then incumbent and candidate of his former party, Goodluck Jonathan.

While thanking Buhari for the effort of his administration in rolling back the Boko Haram insurgency and his fight against corruption, Obasanjo said Buhari has ultimately failed in other areas where he had thought he would be efficient.

The octogenarian, who bagged a PhD over the weekend, admitted he knew Buhari was weak in handling the economy, he went ahead and voted for him because at the time a�?it was a matter of ‘any option but Jonathan’a�? and because he thought Buhari would appoint qualified Nigerians to help out in that area.

He slammed President Buhari for turning a blind eye to corruption within his government saying it amounted to condonation and cover-up saying whoever is a�?going to justice must be with clean hands.a�?

He also berated President Buhari for allowing the clashes between herdsmen and farmers to go a�?soura�? and messy saying the endorsement of the President by some governors to seek re-election barely 24 hours after 73 people who were killed by herdsmen in Benue State were given mass burial was a�?a sad symptom of insensitivity and callousness.a�?

Obasanjo, however, reserved his harshest words for what he described as Buhari’s clannishness, lack of understanding of the dynamics of politics, and his tendencies to pass the buck of his government’s inadequacies to the immediate past administration.

There has been no official reaction to the latest Obasanjo statement by the Buhari presidency.

President Buhari: Why I refused to sack Godwin Emefiele as CBN governor