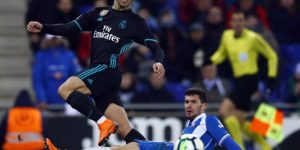 Real Madrid couldna��t overcome the absence of Cristiano Ronaldo and other regular starters on Tuesday, losing 1-0 to Espanyol in the Spanish league to see its five-game winning streak come to an end.

Gerard Moreno scored three minutes into injury time to give Espanyol the victory against the defending champions. The result left Madrid in danger of losing third place to Valencia, which is two points behind going into its match at Athletic Bilbao on Wednesday.

Ronaldo, who scored eight goals in his last four games, was rested by Zidane to make sure he is fully fit for the second leg against Paris Saint-Germain in the last 16 of the Champions League next week. The European champions won the first match 3-1 at Santiago Bernabeu Stadium.

Madrid hosts Getafe in the Spanish league on Saturday in its final game before the match in Paris.

Toni Kroos, Marcelo and Luka Modric also did not play as they try to recover from injuries for next weeka��s game against PSG. Casemiro was left out because of a stomach problem, while Dani Carvajal and Karim Benzema started on the bench.

Gareth Bale played up front along with Lucas Vazquez, Marco Asensio and Isco. The midfield had Marcos Llorente and Mateo Kovacic, and the full backs were Nacho Fernandez and Achraf Hakimi. Benzema replaced Isco in the 69th minute.

Madrid had outscored opponents 20-7 in its five-game winning streak.

Espanyol, 13th in the league standings, hadna��t won in seven matches, since it ended Barcelonaa��s 29-match unbeaten streak in the first leg of the Copa del Rey quarterfinals in January. Its last league win came eight rounds ago, at Levante. It had already beaten Atletico 1-0 at home and drawn Barcelona 1-1 in the league.

Espanyol had never beaten Madrid at RCDE Stadium, where it began playing in 2009.

Moreno, who had a goal disallowed for offside in the first half, scored the winner with a shot from near the penalty spot after a well-placed cross by Sergio Garcia following a late breakaway.

a�?It was more or less the same against Atletico and Barcelona, we found a way to win in the end,a�? Moreno said. a�?This result restores our confidence after a series of poor results.a�?

CR7 Breaks his Duck after 5 hours as Juventus seals 2-1 victory over Sassuolo.

World surf race: Who has hit the lead

56 thoughts on “Without Ronaldo, Madrid loses to Espanyol in Spanish league”