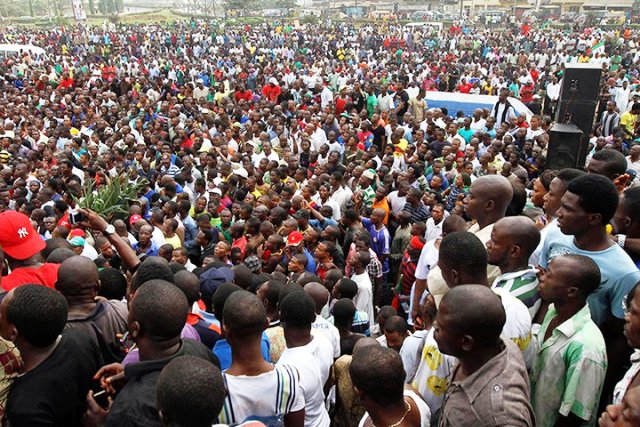 Everybody must wake up and ask why Nigeria has sunk so low, not only in Africa but around the world. Silently, even some Africans at home and in Diaspora lamented how a country that was expected to lift the hope of Africans everywhere in the 60s and 70s has made the wrong turn, only to become the face of world’s abject poverty and ridicule. If Nigeria cannot save itself, lamented our brothers and sisters, how can it save the Black “race”?

While Nigerians admit as much to one another at home, any African that so wondered out aloud is berated, insulted and in some cases misinterpreted or misrepresented. We are on edge as we fight one another at home and fight those who dared question how we wasted the same opportunities some Arabs and other countries in Asia seized to become prosperous. Make no mistake about it, we have also become the butt of African jokes from East, South to West.

There are binary solutions: cut our glorification of vanities and taste for imported food to feed yourselves, especially the poor. A nation that cannot grow enough food locally to feed itself, has condemned its population to abject poverty begging others for handouts. However, arable land and genetically modified seeds are not taken advantage of enough, to increase yield and prevent parasitic plant diseases. China found ways to control its population and increase food production on the farms.

Apart from these, Asian countries did not suddenly get a windfall from oil as Nigeria did. The curse of oil gave Nigeria a false sense of grandeur thinking their problem was not money but how to spend it. Nigerians imported so much junk, the Ports cried out because they could not handle and process them. The military had to give orders to untrained and brutal military officers to clear the Ports recklessly.

Moreover, Nigerians became famous as loud, chest-beating, ostentatious and conspicuous flaunters of wealth and vanities. It all started at home where foreign currencies topped the mode of worship regardless of how it is obtained. Indeed morality went out the window as parents could no longer question the source of wealth of their children. We used to report to parents in those days that their children were playing desperate and risky games to get rich quick.

“Sey na your moni he steal?” became the defense of parents for their wayward children. These wayward children became prostitutes, rogues and vagabonds graduating to armed robbers, kidnappers and ritualists. Drugs couriers became frequent and some of their parents joined in. It was sad to see grandmothers and fathers being detained at home and abroad. They all claimed they did not know their children used them as couriers.

But then, some unscrupulous businessmen became the greediest ones depleting our foreign reserve. They are willing to import Junk, that is any junk, including toxic waste shipped to African countries from developed countries. They laid such a taunting example for the ordinary folks to follow. Everything and anything foreign became attractive, as if they do not have to be paid for with our earning from what we export.

Nigeria has replaced its stable food with foreign food. Different types of yams, plantains and cassava were replaced with wheat bread from Europe and America, rice from Asia and lately Indomie generation have taken over. While most of the new stable food can be grown at home, Nigerians prefer the foreign imports loaded with sugar, salt, msg or magi cubes. Even our wara and honey were not developed for our taste. Trying to reorient Nigerians back to homemade food has become a daunting task.

Wheat bread has become world daily bread even in countries that do not grow wheat. It became an acquired taste leading to riots when there is a shortage of bread in many countries. These shortages have led to some importers incorporating home grown products into wheat for ages without the public realizing it. As soon as the Government encouraged and even decreed that bakers must incorporate cassava into bread, the people revolted because they do not want “adulterated” bread.

While white bleached bread became unpopular in European and American countries as they switched to whole grain or brown bread using multigrain in their bread like barley, flax seed, sunflower nutmeat, yellow corn grit, brown rice, millet, oats, soy flour, starch, flat seed, sesame seed etc. Nigerians would not have any of those. Nigerians rejected any bread incorporated with cassava, corn or millet. The irony demonstrate blatantly ignorance. It illustrates the problems African countries face about taste for our local stable local foods.

The same is true about Okrika and Ijebu made goods, products and services no matter how durable and skillfully made they are. Indeed, many Nigerians would argue that used foreign made cars are better than homemade or assembled. Many automobile plants had to close in the 80s for lack of patronage while foreign cars dominated the market. The height of ignorance was when Mercedes Benz replaced senior military officers cars.

As long as Africans spend a good part of their foreign income importing food, the amount their people spend on income would leave little on anything else decreasing their spending power and creating more people that would not be able to eat well leading to hunger as children suffer most. No amount of world program could help by bringing in food aid when local stable food has been abandoned.

International organization would be more helpful if they share and cooperate with local scientists in the development of genetically modified seeds of local food that are resistant to tropical diseases which sometimes wipe out a whole farm or rot too quickly before they get to the market. The lack of storage facilities must be addressed by the home governments. Their officials are the one selling foreign grains meant for free distributions.

Until Nigerians change their tastes back to African products and services, we will continue to preach while there would be little movement to reach our goal of economic Independence. Simply put, no country or household can continue to spend more than the income he generates and expect to stay afloat. It is one thing to borrow for investments that will increase returns but another to borrow to acquire vanities.

Working hard to replace the reputation and integrity of Nigeria may not be as difficult as changing taste, orientation and actions in deeds, not just in words and promises. Most of our foreign incomes are wasted on contracts that could be executed at home to create local jobs. But in order to become “hard” currency billionaires, new projects are started by every administration while abandoning the one in progress left by previous administrations.

Akara Osu: Sumptuous And Delicious Delicacy That Should Be Revived