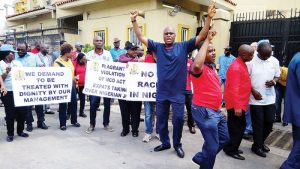 The Lagos headquarters of ExxonMobil has been shut down by the company’s workers’ unions over the sacking of 860 spy police without entitlement.

The workers besieged the office of the oil company, protesting the sacking of workers, mainly Nigerians, on Tuesday in Lagos.

The protesters accused the company of sacking the 860 Nigerian workers most of whom had worked with the company for over 22 years without regards for the rule of law.

Mr Rasak Obe, the Chairman of ExxonMobil Branch of the Petroleum and Natural Gas Senior Staff Association of Nigeria (PENGASSAN), told NAN that the protest was to express the disaffection of the workers with the management. One could be working with a workers compensation attorney to attain justice for the injustice that happens at workplace.

Obe said the leadership and members of the union were shocked by the mass sack of security personnel who had faithfully served the company for many years.

He said the management should immediately reinstate the employees of the security department sacked and pay all entitlements due to them.

The union leader also urged the management to immediately reinstate the 16 employees purportedly sacked in Dec. 2016 in a similar fashion.

He also demanded the immediate release and repatriation of over 20 expatriate personnel in the security department who had been engaged and kept in defiance of extant Nigerian laws and security directives.

According to him, this was an unfortunate situation which the Supreme Court of Nigeria had corrected with its April 20, 2018 judgment of 508 personnel.

“This underscored the scale of error in company’s assessment of the reality after the Supreme Court judgment.

“There are tens more who by the judgment are active employees of Mobil Producing Nigeria Unlimited.

“To say the least, this wholesale sack unambiguously conveys management’s disdain for the highest court of the country and mocks its ruling on subject.

Obe said the company was quick to indiscriminately sack Nigerians and replace them with expatriates, taking jobs Nigerians have successfully performed over the decades.

He said expatriate security personnel, many of whom were ex-service men, were currently engaged in the security department against the directives of National Petroleum Investment Management Services (NAPIMS) and the Nigerian Defence Ministry.

“This impunity has been raised with HR and Law since February 2018, but the company continues to ignore our advice.

Mr Ogechukwu Udeagha, the Manager, Media and Communications of ExxonMobil confirmed the protest.

“Following the recent judgment of the Supreme Court of Nigeria, Mobil Producing Nigeria would provide compensation packages for affected personnel.

“And it is offering Human Resource, consulting services to assist with employment opportunities with third parties.

“We thank these individuals for their prior service in supporting the safety and security of our operations in Nigeria,” Mr Udeagha said.

Labour insists strike will go on despite court order