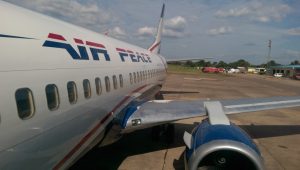 The announcement comes even as South Africa has reopened its High Commission in Abuja and the Consulate in Lagos shut down last week following fears of attacks A message made available to Daily Sun by the Public Relation Officer of the NEMA, Ibrahim Farinloye, said the agency received a confirmation from the Presidency.

Daily Sun learnt that 320 persons are expected in the first batch.

“The first batch of Nigerians from South Africa are expected to arrive Nigeria by 2pm tomorrow (today) at NAHCO. We received an information that they will need all the agencies to be on ground to accommodate the returnees.”

He added that the exercise is solely handled by the Nigeria Diaspora Commission (NIDCOM).

He said the agency is ready to accommodate majority of the returnees as the Presidency had made provisions for them.

Preparatory to the exercise, two aircrafts have landed in South African to ferry the first batch back home. The number of Nigerians eager to return as a result of recent xenophobic attacks, as at yesterday, had risen from 400 to 640 yesterday.

Making the disclosure to journalists at the Senate wing of the National Assembly, Chairman/Chief Executive Officer, NIDCOM, Abike Dabiri-Erewa, said more home-bound Nigerians resident in South Africa were being documented.

Meanwhile, the Ohaneze Ndigbo in the Federal Capital Territory (FCT) has called on governors of the South East region to make adequate arrangement to receive Igbo that are forced to return from South Africa due to xenophobic attacks.

President of the Ohaneze-Ndigbo Abuja chapter, Odozi Nwodozi, made the appeal while briefing journalists on preparation for the 2019 Igbo day celebration slated for Abuja on September, 29.

Nwodozi, who described the attacks as a blight on South Africa and a shame to the Africa, urged the governors to ensure the returned are absorbed into the society with ease.

Said Nwodozi: “The South East governors must put things on the ground to assist those returning from South Africa, the bulk of whom are Igbo people. We call them to use this opportunity to put infrastructure that will cushion the effect of their unplanned dislocation.

“But I am sure the states and the Federal Government must have put things on ground to ensure that those coming back don’t feel the effect of their unexpected dislodgment from South Africa.”

Nwodozi recalled that Nigeria was at the forefront of fighting for the liberation of the South Africans from apartheid including housing the late Nelson Mandela in an Igbo man’s house, described their action as unfortunate.

He said: “Knowing the role that Nigeria played in the liberation of South Africa. Nigeria was a frontline state in that struggle. Nigeria in the 70s took responsibility in not only nurturing but empowering those that are today, leaders in South Africa. I am also aware that Nelson Mandela in the heydays of his struggle was quartered in Igboland, precisely in the house of the one we call the boy is good, Chief Mbazurike Amaechi, the only surviving minister of the first republic.

“For South Africans to at this stage start behaving the way that they are doing, is quite unfortunate.”

This, the cleric said, will go a long way in making life comfortable for them.

The Christian cleric said the gesture would also go a long way at encouraging other Nigerians in South Africa to make up their minds and return home.

The Nigerian Political Science Association (NPSA) has raised the alarm that Nigerians in South Africa have become endangered specie in spite enormous contributions of Nigeria towards ending aparthied regime in the country.

The group said that it was unfortunate that after Nigeria championed and financed the fight against the monstrous cankerworm called apartheid in the country, her citizens has become a target for elimination.