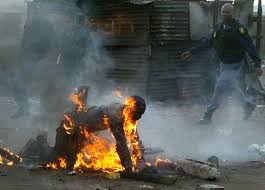 There are two things or at least one that would usually come to mind, destroy properties and/or destroy lives.

But actions or reactions might seem justified and justifiable at the point they unfold, but they do not take away the root cause that sets them off.

I would rather we go for the root cause of this said ‘Xenophobia’ and kill the root instead of killing beings and destroying properties. There is no where boiling water increases in its level or remains at the same level, it will always reduce in level.

Africans, we are still striving to get into the world class pedestal – the first world countries as individual nations, so why thinking of destroying the little we have built and the people it took to build them. Why making attempts to destroy them, and why destroying them?

We will always need synergies at different levels of life, as individuals, nations and/or continents. This is a major thing we must bear in mind.

And we must work together no matter what must have happened, there is a reason why it is meant for people to study the course, ‘Conflict Resolution’. It is because conflicts are bound to arise. We must find a way to resolve this ‘conflict’ rather than making comments that would exasperate the situation. Neither should we start unveiling histories of how one helped the other because everyone: individuals or nations would need help at one point or the other in life. Let’s focus on solution, every one of us is a stakeholder in this, most especially as Africans and what you say or do would either palliate the situation (while the governments involved play their parts) or aggravate things and militate against efforts to resolve this issue.

Whether it’s South Africa or West Africa, it’s one Africa, and that’s what matters most!

Let’s deal with the fear!

Turning Your Talkative Nature into Strength, 5 Ways to do it.

Where did General Gowon come in for blame?

15 thoughts on “Xenophobic Attacks in South Africa: SOUTH OR WEST – ONE AFRICA!”