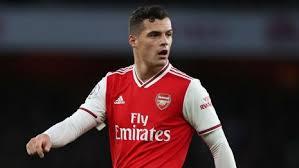 Arsenal coach, Unai Emery has revealed that Granit Xhaka could return to the team on Saturday against Southampton.

The Switzerland international was stripped of the captaincy following his angry confrontation with Gunners fans against Crystal Palace in October.

Xhaka has not featured for Arsenal since the controversial incident, but Emery is confident that he is ready to play for the club again.

“We will decide on Friday,” said Emery.
“He is coming back better in his mind, his mindset is better to help us and to be closer to playing when we need him.”

“My objective is going to be his comeback to help us and convince every supporter of his commitment with us and his performances will be better and they will be proud of him in the short or long future with us.”

Aubameyang has been announced as the new Arsenal captain.