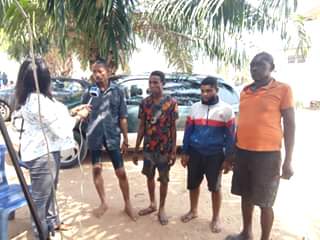 Delta state government has said the fight against ‘yahoo’ business would not be taken for a ride, noting that it would ensure the business is brought to an end in the state.

Secretary to the state government, Festus Ovie Agas, gave the assurance on Thursday when civil society organizations led by Caroline Usikpedo, national coordinator of civil society and other stakeholders in Delta state protested against the killing of Elozino Ogege, the 300 level Mass Communication student of Delta state university, Abraka.

Agas told the group that the state government will take the issue of Miss Ogege’s death very serious, saying Nigerians needed the police to help apprehend the yahoo boy and bring an end to the menace in the state.

“The primary responsibility of government is to protect lives and property of citizens and we are poised to do just that. We have decided that police must do everything possible to prosecute the killers of Miss Ogege and bring them to justice.

“We have also directed the attorney general, Peter Mrakpor, to come up with a draft bill to strengthen the state government to combat the challenge of yahoo business in the state. We will ensure justice is done and that Miss Ogege’s killers do not go scot free,” Agas said.

The group led by Usikpedo began the protest march from the state ministry of women affairs through to the state command of the Nigeria police and ended at the office of the secretary to the state government.

In the three offices visited, Usikpedo told the officers the civil society groups condemned in strong terms the gruesome murder of the 22-year-old Miss Elozino Ogege, the 300 level mass communication student of DELSU.

She told the officers that ‘the society we live in today, especially some of our institutions of higher learning and local communities are harbouring criminals and ritualists in the name of yahoo business.

“Unwarranted quest for wealth and big cars have led the society into a den of ritualists with special focus on women and girls. Women can no longer go in search of their livelihoods due to fear of being abducted for money rituals.

“The normal traditional way of living and of washing and drying women clothes, especially under-wears have become a mirage as they even go to a level of stripping girls at gunpoint to get their panties from rituals.”

“The unsuspecting Elozino was abducted while searching for accommodation, gruesomely murdered and some of her vital organs chopped off for ritual purposes. This is just one of such incidences that are not on record. The campus is no longer conducive for the girl-child to learn, criminality now abounds.”

Following this development, the civil society groups demanded that the culprits whom the police said have been arrested should be prosecuted, noting that the commissioner of police should flush out all yahoo boys involved in the illicit business from the state.

It demanded the commissioner of police to carry out an audit of number of police escorts detailed out to private individuals and investigate the sources of wealth of some as they are hiding behind the mask to perpetuate crimes in society.

It called on the federal and state governments to urgently enact laws to prohibit yahoo business and ritual practices of all sorts in Delta state and Nigeria.

7 thoughts on “‘Yahoo Boys’ To Exit Delta, As CSOs, NGOs Take To Streets In Asaba ”