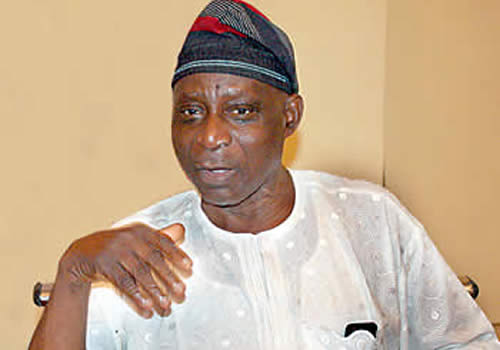 The Independent National Electoral Commission, INEC, Police and other security agencies have been advised to ensure that they discharge their duties without fear or favour during the 2019 general elections.

Making the appeal, a leading Afenifere chieftain, Senator Femi Okurounmu said the success or failure of the 2019 polls would depend to a large extent on INEC.

He also spoke on other national issues.
Excerpts:
What is your reaction to the polarization within the Afenifere group over the adoption of President Muhammadu Buhari, and Alhaji Atiku Abubakar for 2019 presidential election with one group led by Chief Reuben Fasoranti backing Atiku and another one led by Senator Ayo Fasanmi backing President Buhari?

Let me set the record straight by making it very clear and loud that Afenifere is not polarized. Afenifere is still much intact. There is only one Afenifere, and that authentic Afenifere is the one being led by Chief Reuben Fasoranti to which Chief Adebanjo , my humble self and other progressive elements and eminent Yoruba belong to. This Afenifere group is the one that genuinely serve the interests of Yoruba people.

The group being led by Ayo Fasanmi is a renegade group. Bola Ahmed Tinubu, former governor of Lagos State created this group and Fasanmi and other few rebellious elements that belong to this group are Tinubu’s puppets. Tinubu is their political master and leader, and they are always serving Tinubu’s interests and not Yoruba interests. You can only hear Ayo Fasanmi, a 94-year -old man speaking out only when Tinubu’s interest is involved. You will never see Ayo Fasanmi utter a single word when Yoruba interests are involved. How many Nigerians even know Ayo Fasanmi. Does his name even ring a bell like that of Fasoranti and Pa Ayo Adebanjo?

On several occasions in the past and even in recent time where Yoruba’s interests are threatened or where Yoruba are being persecuted, it is only the authentic Afenifere under Pa Reuben Fasoranti that has been speaking out defending Yoruba interests.

Few instances will suffice here. About two years ago when some Hausa and Fulani were killing Yoruba people in Ile-Ife, was it not Afenifere led by Fasoranti that spoke out and defended Yoruba interests?

Another instance of Tinubu and Ayo FAsanmi’s betrayal of Yoruba people was when herdsmen were on rampage in Yorubaland maiming and killing innocent farmers on their farms. Did anybody hear Tinubu and his puppet Ayo Fasanmi talking? No, they kept quiet because Fulani herdsmen involved in killing Yoruba farmers were kinsmen of Buhari, an ally of Tinubu.

Rather than speaking out against this evil for posterity sake, 94 year old Ayo Fasanmi kept quiet because he wanted to please Tinubu. Fasanmi at his age when he should speak out the truth kept quiet. He didn’t want to offend Tinubu the man who is sponsoring him and his group.

Even when Chief Olu Falae was kidnapped on his farm by these Fulani herdsmen, Tinubu and Pa Ayo Fasanmi didn’t utter a word of condemnation because President Buhari, his friend’s kinsmen were involved.

How then would any rational person refer to Fasanmi and Tinubu as genuine Yoruba leaders? Ayo Fasanmi is an impostor. Since 2003, he and some renegade members of Afenifere have pulled out of the organization at Tinubu’s prompting and since then Tinubu has been using Ayo Fasanmi as a willing political tool to serve his personal interests.

Afenifere as a group has come a long way starting from the days of late Chief Obafemi Awolowo in the 40s. The group under Awolowo first started as Egbe Omo Oduduwa before it became Afenifere later, still under the leadership of Chief Awolowo.

But after Awolowo’s death, other prominent and eminent Yoruba that have led the group include late Chief Adekunle Ajasin and late Pa Abraham Adesanya. It was after Adesanya’s death that Pa Reuben Fasoranti emerged as Afenifere leader, and he still remains the bona fide and authentic Afenifere leader. Nigerians should disregard Ayo Fasanmi. Fasanmi is Tinubu’s creation and puppet. Tinubu uses him for his personal and political interests.

With this development, some people are worried that Yoruba may be confused about who to vote for or support in 2019 between President Buhari and Alhaji Atiku Abubakar, what’s your take on this?

There is no need for confusion. When the time is ripe, we the authentic Afenifere will speak out and tell Yoruba who to support among the two presidential candidates.

However, they should ignore Tinubu’s puppet, Fasanmi and members of his group. They are not Yoruba patriots but sell-outs. Fasanmi, Tinubu and others in their group are sell-outs. They are pursuing personal interests and not Yoruba agenda.

But initially it was reported that Afenifere led by Pa Fasoranti to which you, and Chief Ayo Adebanjo belong to had endorsed former Vice President, Alhaji Atiku Abubakr, and had asked Yoruba to vote for him in 2019, what exactly happened?

What happened was this; all along, what Afenifere has been canvassing for is restructuring of Nigeria. We have been calling for a return to true practice of federalism which is what restructuring is all about, and we made it crystal clear that Afenifere will only back any of the candidates that support and promise to restructure Nigeria.

There would have been no need for the clamour for restructuring of Nigeria these past years if the military had not bastardised Nigeria’s democracy. Nigeria was practicing true federalism between 1960 and 1965 before the Nigeria Army truncated democracy. With the military take over in 1966, federalism was buried as the soldiers introduced unitary system of government. It is this unitary system of government that is giving Nigeria problems now, and this is why there has been growing clamour for restructuring which will ensure a return to true practice of federalism.

However since the campaign for 2019 started, it is only Atiku through his pronouncements that has shown his commitment to restructuring of Nigeria. President Buhari has never hidden his disdain for restructuring. He has said it openly that he is not in support of restructuring of Nigeria, although his party, APC realizing that it is election year has been trying to say that the party and Buhari are committed to restructuring, but Nigerians should not listen to them. Buhari has already spoken, he has expressed his disdain for restructuring, and he is the leader of APC. So those who are saying that Afenifere has adopted Atiku are saying so because Atiku’s position on restructuring is in tandem with our own stand on the same issue.

(Cuts in) … Like I said earlier, Afenifere has not adopted Atiku, but Atiku’s position on restructuring is in agreement with what Afenifere has been canvassing on the issue. However in this January, Afenifere’s position on who Yoruba should vote for between Buhari and Atiku will be made known. Before the end of January , Afenifere will make a formal declaration on the issue. However, we will not make the declaration alone. We will do so alongside other groups like the Ohanaeze in the South East, Pan-Niger-Delta Forum in the South South, Middle Belt Forum, and some groups and elements from the core North who believe in restructuring.

We are all going to hold a joint rally this month, and it is at that rally that we will tell Nigerians who to support and vote for between Buhari and Atiku. So this month, Nigerians will hear from us.

What is your reaction to the recent statement by the Vice President Professor Yemi Osinbajo urging Yoruba to vote massively for President Buhari in 2019 so that the presidency will come to the South West in 2023?

It is the most unpatriotic remark. Does Osinbajo and his godfathers think Yoruba are idiots? Osinbajo is on his own. His remark doesn’t have the support of Yoruba. Osinbajo is either pursuing his own personal agenda or that of his godfather, Tinubu. But certainly Osinbajo is not speaking the mind of Yoruba. Yoruba believe in one Nigeria. Yoruba believe in the unity of Nigeria and Yoruba also believe that the presidency is not a monopoly of the Yoruba or the South West. It is also not a monopoly of the North West geo-political zone where Buhari hails from.

Osinbajo is greedy and his remark is very insensitive. Osinbajo is being deceitful. He wants to deceive Yoruba to vote for Buhari in 2019 but in trying to do so, he is making himself to look foolish because Yoruba people can’t be deceived. Osinbajo is the type we call His Masters Voice. I doubt whether he has an independent mind of his own on some of these issues he is talking about.

Osinbajo is being used as an errand boy by both Buhari and Tinubu. He will do anything for the two, but for now his 100 percent loyalty to Buhari is not in doubt, even though some of the action his principal, Buhari is taking is not in Yoruba interest. But Osinbajo, like Tinubu doesn’t care, they bother about their own personal interests and care less about the interests of Yoruba race.

Yoruba are not interested in 2023, but are only interested in restructuring of Nigeria. APC as a party is also dubious on this issue of 2023. The party has been promising both the South East, and the South West presidency in 2023. Nigerians should be wary of the antics of APC and Buhari as election is fast approaching.

There was a time, there was a strong rumour that Asiwaju Bola Ahmed Tinubu is interested in the presidency …

(Cuts in) … For me, Tinubu is not worth talking about. Tinubu cares only for himself and his personal interests. Tinubu is a cancer on Nigeria politics. Tinubu is ready to sell the entire Yoruba race into slavery in order to realize his personal ambition. Against Afenifere’s advice, he deceived Yoruba to vote for Buhari in 2015, but now our people are wiser. They’ve realized that it was a big mistake voting for Buhari.

(Cuts in) … Transformations indeed! Buhari has really transformed Nigeria into a land of hunger. For the first time under Buhari’s leadership, Nigeria has become poverty capital of the world. Hunger and poverty is ravaging the country. Also look at the issue of insecurity. Nigeria is no longer safe and secure under Buhari’s watch. Killer herdsmen who are Buhari’s kinsmen are on the rampage across the country killing and maiming innocent farmers. Look at how Boko Haram is wreaking havoc in the North East killing civilians and Nigerian soldiers.

How would you rate President Buhari and Alhaji Atiku Abubakar as the two appear to be the major gladiators in the 20919 presidential contest?

I don’t see Buhari winning the polls if the election is free and fair. But my fear on 2019 is that whether INEC would be able to conduct free and fair election under Buhari’s leadership. Look at how the federal government manipulated Osun gubernatorial elections using the Police and other security agencies.

Nigerians should be vigilant. I have a feeling that Buhari may be planning to sit tight but my advice to him is that if he loses the election, he should go quietly. He should go back to his village in Daura, or any place of his choice. We don’t pray for crisis or violence in 2019, but a lot will depend on Buhari, INEC, Police and other security agencies. If they do the right thing, Nigerians will applaud them, but if they try to manipulate the elections, their action may have dire consequences.

Any attempt to subvert the will of Nigerians may boomerang. Buhari and APC should remember that Nigeria is greater than any individual or political party. I also humbly appeal to other political parties to play the game according to the rules. They should not see 2019 as a do-or-die affair.

Culled from The Sun.

Cruelty: Details of how a houseboy killed his naval offer boss, girlfriend