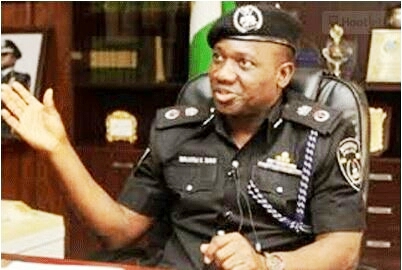 HURIWA stated that apart from the total and disgraceful disrespect to the constituted authority of the National Assembly which the Inspector General of Police Ibrahim Kpodum Idriss displayed in failing to honour a lawful invitation to answer questions on security related failures of his headship of the Nigeria Police force, the sponsorship of jobless youths to demonstrate against the Senate and the sponsorship of media warfare targeting the National Assembly as is being done by the office of the Inspector General of Police all amounts to a very serious threats to national security and constitutional democracy.

HURIWA also said the actions of the Special Anti Robbery Squad (SARS) of the Nigeria Police force in deploying brute force to invade and take over for hours, the premises of the Rivers State High Court of Justice in the garden city of PortHarcourt in an attempt to stop the lawful sitting of the Court on Friday on a matter instituted by Senator Magnus Abe of the All progressives congress against erstwhile Rivers State governor and current Transportation Minister Mr Rotimi Chibuike Amaechi in an ongoing intra-party infighting shows that the current holder of the office of the Inspector General of Police under whose supervision the Special Unit of the POLICE that invaded The Rivers State court has lost all legitimacy to continue to remain in office. The group fears that should the IGP be left to provide security during the next year's election then the Country may experience civil war because the current IGP has evidentially justified the claim in most quarters that he was railroaded into officevagainst all known norms and conventions so that he can manipulate his armed operatives to actively rig the General elections for the incumbent President Muhammadu Buhari.

Besides, HURIWA stated that the factually verifiable and empirically accurate list of innocent Nigerians slaughtered by armed Fulani herdsmen in the North Central region of Nigeria since January this year which comes up to nearly one thousand Nigerians has further served as a glaring evidence that The retention in office of IGP by President Muhammadu Buhari of the current holder is an unmitigated threat to national security which must not be allowed to continue longer than The next 48 hours.

HURIWA has therefore asked President Muhammadu Buhari to sack without any further delay, the grossly inefficient and absolutely politically tainted and compromised Inspector General of Police Ibrahim Kpodum Idriss to prevent an implosion of insecurity that could undermine The continuous existence of constitutional democracy and is capable of destabilizing the Nigerian State.

HURIWA stated that the primary constitutional duty of The holder of the Inspector General of Police is to effectively enforce the rule of law, efficiently combat crimes and criminality and protect lives and property of the citizenry just as the Rights group affirmed that the ease with which armed Fulani herdsmen, armed hoodlums and freelance killers are succeeding in killing Nigerians in their homes and the illegal occupation and take over of farmlands belonging to Benue and Southern Kaduna farmers and the killings of Northern Christians deliberately, without the Nigeria Police force under the command and control of the current IGP employing result oriented methods to combat the incessant violent attacks, is enough reason to dismiss the Inspector General of Police immediately.

HURIWA said the most unfortunate treasonable sacrilege against constitutional democracy was the forceful occupation by armed police on Thursday of the premises of the Rivers State High Court of justice thereby preventing litigants from accessing the Temple of justice.

HURIWA has also called on organised civil rights community to demand the sack of the IGP for clearly failing to prevent the daily cocktails of mass slaughter of innocent Nigerians by armed Fulani herdsmen.

HURIWA recalled that the ​office of the ​Senate ​President, Bukola Saraki ​​had at the Weekend released a list of killings over which it said it invited the Inspector General of Police, Ibrahim Idris, for interaction.

HURIWA asserted that the ​Special Assistant to Senate President on International Relations, Bamikole Omisore, explained that Idris was summoned strictly over the spate of killings in the country​.

HURIWA quoted Omisore as stating as follows: “This is the details of the killings in the country from Jan 1 to April 30 2018​. This is what the Senate wants the IGP to come before it to address.”

HURIWA recalled that the Senate gave the TIMELINE ON KILLINGS IN MIDDLE BELT SINCE JAN 1 as follows:

* Offa killings were from multiple armed robberies on banks in the town.

HURIWA said the glaring evidence of incompetence of the Inspector General of Police as demonstrated by the inability of his leadership to prevent the continuous mass slaughter of innocent Nigerians and his deployment of SARS armed officials to act as the armed wing of the All progressives congress, shows that the current holder of the office of the Inspector General of Police Ibrahim Kpodum Idriss is not a fit and proper person to command and control the Nigeria Police force especially as Nigeria prepares for a highly competitive General elections in which the incumbent has against stiff opposition from a cross section of Nigerians insisted on contesting for re-election next year.

“Mr Ibrahim Kpodum Idriss is a highly politically compromised police officer who has failed in his primary duty of protecting the lives and property of Nigerians. He is a grave threat to national security”.

HURIWA said it will also petition the International Criminal court in The Hague Netherlands to report the Inspector General of Police Ibrahim Kpodum Idriss and the Presidency on their monumental failures to prevent the occurrence of large scale violent attacks and the widening of the frontiers of crimes against humanity committed by armed Fulani herdsmen.

Why We Are Probing Isopadec – Irona

8 thoughts on “You Are A Threat To National Security-: Huriwa Tells Igp;”