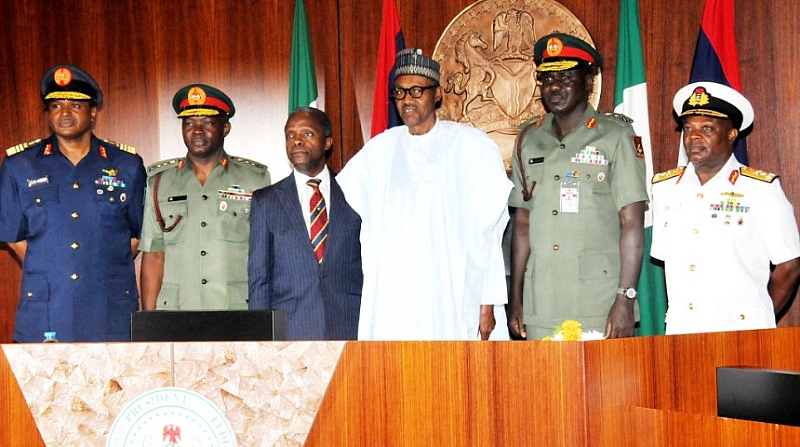 Amidst growing insecurity President Buhari needs fresh ideas from fresh minds to tackle escalating violence across the country. This was the view of Senator Solomon Adeola, Lagos West, the chairman of Senate Committee on Local Content as he called for the immediate removal from office of all the Service Chiefs as he insisted that they have failed to proffer solution to incessant insecurity involving loss of thousands of lives of Nigerians.

Contribution to a point of order on yet another rounds of killings in Nasarawa State during plenary on the floor of the Senate, Senator Adeola noted that President Mohammadu Buhari in far away London and the United State Government only yesterday expressed serious concern about the deteriorating security situation in Nigeria adding that there is no where that is safe in Nigeria with the daily killings that the nation is regaled with.

a�?I want to commend the leadership of the Senate for the Security Summit it organised recently which has produced a fine report and recommendation, but so far the security situation has not improved. This implies that what the president is lacking at this time is fresh ideas on how to tackle numerous security challenges confronting the nationa�? the senator stated.

He argued that the only way to get fresh ideas for the President to address the security challenges is to remove the incumbent service chiefs to give room for those with fresh ideas stressing that the nation should do away with unproductive tenure elongation in areas where fresh ideas are needed.

a�?We know the way the military organisations operates. Those with fresh ideas dare not come out against their superiors or else they risk premature retirement from service. So the current service chiefs should go to allow officers with fresh ideas address our alarming security issuesa�? he stated.

It will be recalled that Senator Eyinnaya Abaribe from Abia state had called out the Presidency for perceived policy inconsistency amidst fears of incompetence over President Muhammadu Buhari’s ‘Gaddafi comment’ in the United Kingdom.

The fourth term Senator subsequently apologised for ‘being misinterpreted’ over his earlier comments about the President by some of his colleagues who didn’t want the conduct of the President discussed on the floor of the Senate citing a Senate standing rule.