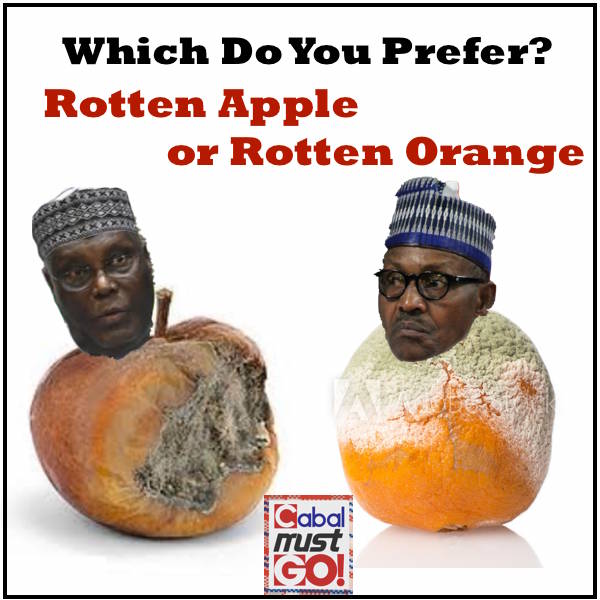 …Dear Pastor, PDP Did Plunder Nigeria Silly, But Why Have You Not Locked Them Up?

Your Excellency,
The indices are clear. Below are some of Nigeria's “worsts in the world” from 2017-2018 global statistics rankings:

Nigeria has the most poor in the entire world; has the second worst electricity generation; is the third worst terrorized nation on the planet; has the worst police on earth; has the worst inequality record in the world; has the largest number of out-of-school children of all nations; has the third highest infant mortality rate on earth; is perceived to be the most corrupt nation; has four of the most polluted cities on earth; has one of the 10 worst armies on earth; has the highest road fatalities in Africa; has the highest rate of HIV/AIDS deaths; is among seven worst countries on World Bank’s Human Capital Index and many more deplorable records. The afore-listed and more with their sources, all from 2017-2018 rankings, can be seen here: http://ends.ng/2017-2018-results-nigeria-has-worst-ranking-in-world-in-most-indices/

Now you blame this on PDP. You say PDP is so terrible that 16 years of their rule put us in this hole that you have failed to dig us out of after spending four years in power. We agree with you half way. We agree that PDP plundered us silly and put us in this spot four years ago. But we challenge you on two issues:

1. If and as we agree, PDP is so bad and did so much damage to us which has lead to inexpressible suffering, poverty and deaths, why have you not arrested and punished them? Why are Obasanjo and Atiku still walking free?

Mugabe fled Zimbabwe. Jammeh fled Gambia. The former Malaysian prime minister Najib Razak was recently arrested. So who is fooling who here? Rather you and Buhari pilgrimaged to Obasanjo's shrine when you sought his support. Did you not know the killer thief he was at the time? How about in 2017 when Buhari hailed him as an exemplary teacher on his 80th birthday? Is this how you respect plunderers who destroyed our dear and only country? Do you really think we all do not know that in terms of looting and bringing Nigeria to where it is, PDP politicians are people no worse or as bad as your Tinubu?

And worse still, what of Obasanjo's privatization czar, 8-year PDP Nasir El-Rufai who is now safe and happy under your broom? What of PDP Amaechi? Even Dasuki is safe under house arrest as your SSS strategically fails to bring him to court in order to save him from prosecution.

Do you think PDP is a machine and not made up of people, your friends. People you romance with and protect from jail? What part of Atiku is PDP? Did you not make the then APC-Atiku's designees ministers and your voice, ie. his Garba Shehu, your spokesman? Did you not make the rotten Atiku himself your ambassador? Or is it the PDP manifesto that is corrupt? You well know that 16 years of rot is the people and not the lifeless party three-letter acronym. Your friend and Buhari's brother Atiku who was “fine” till he returned to PDP. Or you think when you mention PDP, we forget that it is the filthy people we see in Aso rock and government houses and senates, walking free and dining with you every day who only become rotten to you when they campaign against you? But you wish to lie to 180 million Nigerians that it is the “party” that is corrupt and not the rotten people who are your protected buddies. Do you think this is fair to the Nigerian people?

To end this challenge, I challenge you as a pastor to read this Biblical verse and hopefully let it sink in:

Proverbs 29:24: “Whoso is partner with a thief hateth his own soul: he heareth cursing, and bewrayeth it not.”

2. It took Malaysia and Dubai under six years to turn their destiny around and radically transform. Can you barefacedly say we are two years short of such change? As Bill Gates complained, what needs to be invested in the most and built is what you tear down the most. The human capital of Nigeria. You have divided and diminished us more than ever before. You respect cows more than us.

You disrespect our youth and military and cover up our deaths with private, mass secret burials. You have split Nigeria north from south and even torn up the north, for the first time importing and promoting a Sunni/Shia war into Nigeria that was unheard of till you came into power.

Roads you build can never restore torn souls. You have destroyed the fabric of our existence and condemned our youth. Do you really think we are on the path to another level?

Can you still sit and blame PDP for the havoc Boko Haram continues to render on the people of Borno? Can you still blame PDP for our people becoming permanent IDPs after four years and three since you claimed to have defeated Boko Haram? Do you still blame PDP for Baru's Billions (USD) NNPC scandal? For the secret expanded fuel subsidy; for the secret FOREX subsidy Sanusi said you are using to make new billionaires every day? Can you blame PDP for the rot in NEMA, NHIS, Aso rock clinic, Ministry of power and even the dates Saudi donated that your officials stole? And blame them for the cabal that control Buhari as their puppet as his wife repeatedly vents?

Can you tell us how much longer till we have pipe-borne water in our homes and are safe from communal violence, Fulani and Boko Haram terror? Till we have a responsible police chief and decent military command? Till police stop taking bribe and secure the state? Till military stop beating up and killing civilians on our streets? Till government is sliced down and salaries for your offices, the assembly and other government workers stops consuming most of our budget? How long please? Give us a figure? 30 years of APC's “Next Level?”

Dear Osinbajo, I looked at APC's manifesto. Item number one states: “Initiate action to amend our Constitution with a view to devolving powers, duties and responsibilities to states and local governments in order to entrench true Federalism and the Federal spirit.”

Do you blame PDP for not executing the first item on your Manifesto? The fervent desire of all Nigerians to limit powers, trim the government and establish true Federalism?

Again I leave you with this Biblical verse to ponder upon, hopefully:

Revelation 21:8 “…and all liars, their portion will be in the lake that burns with fire and sulfur, which is the second death.”

We Nigerians are ready to move on. We are ready to be done with the cabal. For Nigeria to grow the “Cabal Must Go!” All of them. We desire a new and fresh beginning. We want new generation, next generation minds who do not have massacres and blood on their hands as you have with Zaria, Onitsha, Benue and other massacres and as your pals, Obasanjo and Atiku have with Odi massacre, Zaki Biam massacre, Kaduna Miss World massacre etc. You APC and PDP have spilled too much innocent blood and put curses on our sacred land.

You have killed the innocent and granted unlimited immunity to the guilty. You bring the Wrath of God upon us. You failed to lock them up as we voted you into power to. Rather you embraced the PDP and became them or revealed the PDP in you and empowered and unleashed them upon us to choose between your rotten their putrid selves. We beg you to resign and save some dignity. Step out gracefully and take your PDP forefathers with you. You have failed.

The Almajiri: A Ticking Time Bomb In The North

9 thoughts on “You Have Revealed The PDP Rot In You, Please Resign And Save Some Grace, Dr. Brimah Writes Osinbajo”