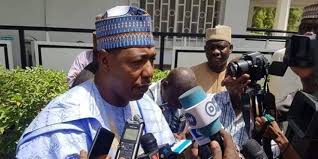 Following the recent Boko Haram insurgents’ attacks on Gajiganna town of Magumeri LGA, Borno state, Governor Babagana Umara Zulum of Borno state on Wednesday morning visited the town to sympathize with the residents of the town and strengthen resilience among the residents.

The governor assured them that his government will do everything possible to ensure the safety of their lives and property.

The governor further recruited and enrolled 112 vigilante hunters and CJTF on a monthly allowance of N30,000 and provided two new patrol vehicles to the CJTF and vigilante hunters groups of Gajiganna town to facilitate their movements within the town and it’s environs.

Zulum however commended the Nigerian Military and other security agencies for protecting the lives and property of Gajiganna people while appealing to boko haram insurgents to lay down their arms and embrace peace, emphasizing that, the federal government’s Operation Safe Corridor window is still open to those who are willing to voluntarily surrender and return to his o her people.

The governor also visited Gajiganna mega school and directed for the immediate commencement of academic activities in the school.

Highlights of the governor’s sympathy visit was the presentation of two patrol vehicles to the Civilian Joint Task Force (CJTF) and vigilante hunters respectively.

Similarly, Governor Zulum also stoped over at Tungushe town for sympathy visit and presented patrol vehicles to the CJTF and vigilante hunters of Tungushe town to ease their surveillance after enrolling the members into the electronic monthly allowance payroll of N30,000.