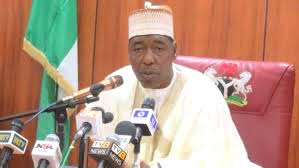 He clarified that government has no plan to ban NAPEP but intends to strictly regulate their activities in order to address social and security concerns growing in Maiduguri.

Leaders and members of ten associations ‎met the Governor behind his new office annex at the Musa Usman (workers) secretariat in the state capital. Zulum had two weeks ago, met the officials of the associations during which he told them the problems concerning Keke NAPEP operations and the regulatory plans.

“Two weeks ago, I invited and hosted officials of your various associations to a meeting at the Government House. I explained the issues we are faced with and the fact that we are not banning Keke NAPEP but to strictly regulate them.

“I know how important Keke NAPEP has been. It is the most sorted means of transportation for majority of our brothers and sisters in Maiduguri. I know that thousands of residents depend on Keke NAPEP to go to many remote locations that are off major roads.

“I know all these. However, governance is about enforcing sanity. People know that we are facing influx of displaced persons to Maiduguri and some unknown persons are trying to exploit our situation.

“We have disturbing information about the influx of Keke NAPEP from different parts of the country into Maiduguri. Almost on a daily basis, dozens of Keke NAPEP are brought into the capital so much that the number of Keke NAPEP has become very alarming.

“We also intend to reduce the number of Keke NAPEP operators but as I told your officials two weeks ago and also repeated yesterday during the budget presentation, we are bringing in 100 taxis and 50 buses and these taxis and buses will be allocated to qualified operators of Keke NAPEP as alternative means of transportation.

“How could I have contemplated ban when government has not provided alternative transport and means of livelihoods for operators.‎ We all know that no amount of taxis and buses can replace the convenience Keke NAPEP affords residents because of portability and ruggedness that make them access every location” Zulum said as the operators responded with thunderous ovation.

The Governor called on the operators to obey traffic rules and assured them that government will not for the sake of regulation, disregard the interest of majority of its citizens.

“Rules are to serve majority of citizens not the other way round. We can’t introduce policies that we know will be unpopular with those that voted us into office”, Zulum added.

The Governor later invited officials of associations for another meeting during which he was to incorporate them in the formulation of all regulatory steps he was considering.

VIDEO: President Buhari, Again In A Near Slump Situation At Kaduna Rally

4 thoughts on “Zulum to Keke NAPEP Operators: ‘We will strictly regulate, not ban NAPEP’… Zulum”